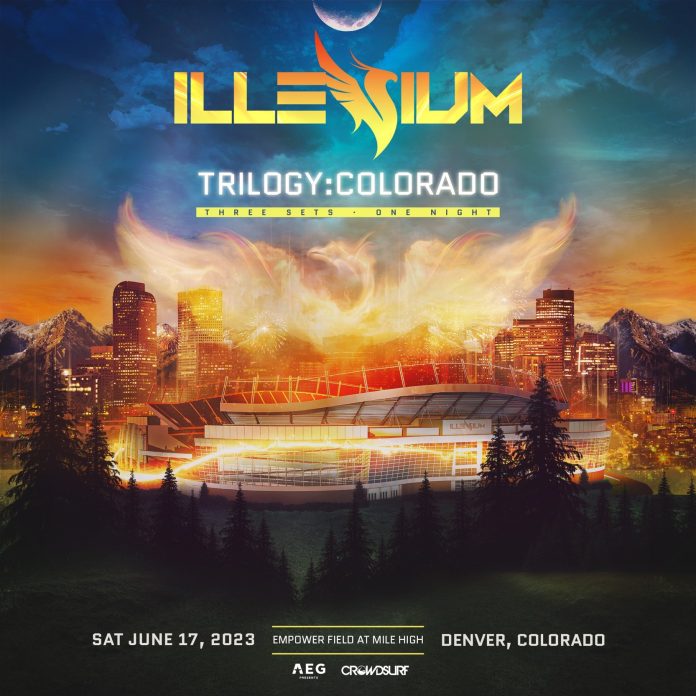 The future bass and rocktronic artist, ILLENIUM, out of now where decided to announce his 2nd Trilogy event in Denver, CO at Empower Field at Mile High Denver on Saturday June 17th, 2023. That will be 2 years after his first Trilogy at the Raiders’ Stadium in Las Vegas, NV. Tickets will go on sale July 27th at 12 noon MT time. Make sure to sign up for early access if you want to buy a ticket that day.

Trilogy and what fans love about it

Trilogy is a event centered around ILLENIUM’s music. The man himself plays 3 sets, each dedicated to a time frame in his music career. First, he plays a throwback set. Second, he jumps into a set involving everything in between his old and his brand new. Lastly, he tops the night with his newest tracks and album. Trilogy #1, the finale set involved his newest album ’Fallen Embers’. This full night of ILLENIUM and a few supporting DJs only happens once every so often, and it is the Trilogy event.

Even though Trilogy is no longer in Las Vegas, the show still offers the same that it once was. If ILLENIUM changed his set count it would contradict the name. In Denver, Trilogy is still going to be hosted in a stadium. That will give it the same layout; a floor for special ticket buyers and than a plethora of stadium seating. These tickets heavily range in price, and floor seating sells out quick.

Denver, CO is where ILLENIUM and many other similar producers reside. This could be the reason for the change of location. It could also be that Nick(ILLENIUM) wanted to switch it up so different fans wouldn’t have to travel so far. Also, it could be that Denver is in the center of the United States with a large airport. There are many reasons why the change could bring more positives to the table. Either way, ILLENIUM’s Trilogy will be another banger show to go down in history.