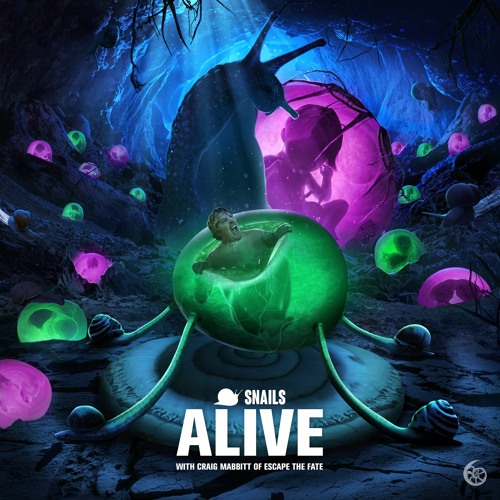 Fresh off the release of the third and final edition of his wildly popular Slime Time EP series, SNAILS is back with more music and the biggest announcement of his career to date. Out now is his new single “Alive” feat. Craig Mabbitt of popular American rock band Escape the Fate. This will also serve as the lead single to HELIX, his forthcoming, highly-anticipated LP dropping later this summer.

“Alive” is the first single of my upcoming new album HELIX. Coming from a Metal – screamo background, I wanted to hit hard with this one and show this influence in my life into this song. The idea is to mix a big festival anthem with an intense and energetic SNAILS signature bassline. This upcoming album blends many different genres that made me become who I am as an artist and sound designer today. With the catchy hook from Craig Mabbitt (lead singer of Escape The Fate), the melodic aspect and my soundscape, “ALIVE” is here to mark the beginning of HELIX in a powerful way. The intense chord melodies bring the listener into the new world of SNAILS and tease the direction of the whole body of work. – Snails

Despite being a superstar in the electronic music scene, Snails has always committed himself towards innovation and pushing the boundaries of his skills. “Alive” is everything fans have come to love about Snails.. with a little extra. Mixing the explosive elements of his signature bass style with the raw, emotional offerings of screamo, “Alive” is something entirely new from Snails. An element of ‘old school’ meets ‘new school’ is on full display as the Montreal-native flexes both the creativity and ingenuity that has made him a household name.