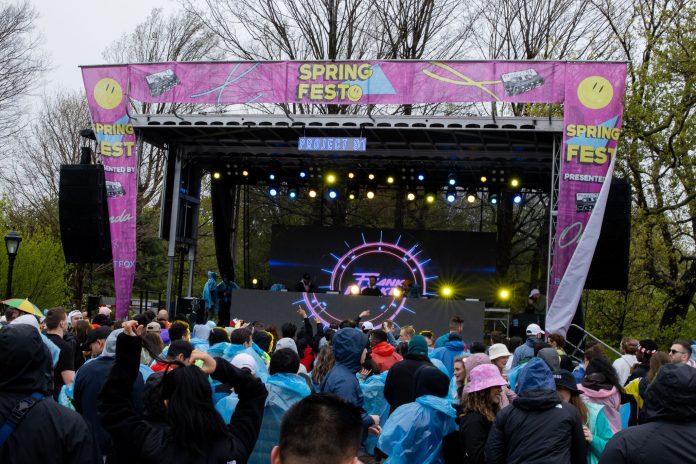 The New York dance music community knows the scene is made up of Manhattan bottle service clubs, Brooklyn warehouse shows and the annual Electric Zoo festival to close out the warm season. It can get repetitive, but luckily, New York City-based Project 91 has added some unique events to the mix. One of their biggest yet, Spring Fest, went down at the LeFrak Center at Lakeside at Prospect Park in Brooklyn earlier this month. The one-day festival featured a handful of renowned artists and a DJ set by Jai Wolf to close it out.

Leave it to New York to throw a curve ball with a rain storm on May 7. But Project 91 turned what seemed like an unfortunate situation to the best-case scenario for dance music fans who would probably otherwise be stuck indoors. Project 91 kept fans informed on social media that the show would go on, rain or shine, with half the venue sheltered from the rain. From the looks of it, everyone had a blast.

“Spring Fest was so special because there was is no better way to kick off festival season then being outside in the park with your friends listening to great music,”

Doors opened at noon and Jacko, Georgi and Charlie Ford got the party mood going. At 2:45 p.m., South African DJ MADDS hit the decks and revved up the crowd braving the rain at the front of the stage, all the way to the covered area in the back and the VIP section.

Canadian DJ Frank Walker went on at 3:45 p.m. with an energy-packed set that had attendees jumping up and down despite the rain puddles. The “Only When It Rains” producer was jumping himself and the crowd was having as much fun as on a hot summer day.

Deep and tropical house producer SNBRN went on at 5:15 p.m. His groovy set fit the overcast atmosphere perfectly. It was a nice change in pace from the hands-up-in-the-air set before him.

Progressive house and trance DJ Audien hit the stage around 7 p.m. and brought all the feels and high energy of his Progressive House Never Died tour. Fans were treated his classics including “Something Better” featuring Lady Antebellum. He even appeared to drop some unreleased music.

By the time the headliner, Jai Wolf, started at 8:30 p.m, the rain had tapered off and the dance floor around the stage was packed. Jai Wolf played his signature indie-dance anthems, fan favorites like Porter Robinson‘s “Something Comforting“, and of course, his famous “Indian Summer“.

Project 91 picked wisely with the LeFrak Center at Lakeside – it was truly a hidden gem. It’s actually an ice skating rink in the winter. During Spring Fest, its covered section was perfect for blocking the rain and providing a place a short distance from the action to chill.

“When we first visited the venue, we fell in love,” said Project 91 co-owner Duncan Abdelnour. “In New York City it’s rare to have nature and a lush green backdrop for any event. The venue worked out perfectly and we have to say thanks to the New York City Parks Department for having us.”

The covered area of the venue was spacious, accommodating a large bar, ball pool and various vendors and sponsors that even MADDS was exploring. There were built-in concession stands for hot food.

“As a growing company in one of the toughest talent markets in the country we are always looking to push the boundaries for our events and offer fans and artists something new,”

“We’re always lining up new events and parties and working with cutting edge and seasoned artists and DJs.”

When thousands of people show up ready to rave with solid rain on the forecast, you know it’s going to be a good crowd. Project 91 handed out free ponchos and fans were on the dance floor whether they used them, umbrellas, or nothing at all. It was a great reminder of how fun raving in the rain can be. Project 91 has proven to draw this type of crowd and there’s more coming soon.

“Our commitment to our community remains the same as day one: To curate and produce the best experiences that this incredible city deserves,”

“We are excited to continue bringing bigger and better events to this place we’re so proud to call home.”

There’s a lot that goes into making an event successful. The music, the venue, the people, the organizers… What may have seemed doomed due to the weather worked out to be the exact opposite, because everyone brought the best vibe. If you’re hoping Spring Fest is going to happen again, or if you missed it, there’s good news.