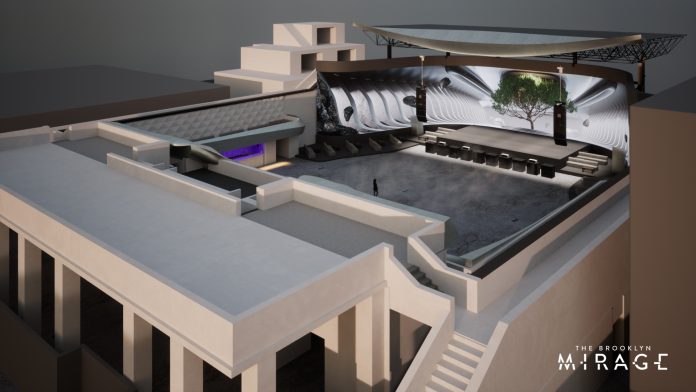 Avant Gardner has revealed the return of The Brooklyn Mirage with a full venue redesign for its upcoming 2022 season. Welcoming a vast variety of top tier artists and brand takeovers, the reimagined Brooklyn Mirage will debut on Thursday, May 5th with a one-of-a-kind 200-foot wide video wall topped by a 100-foot custom-built stage roof, to-be-discovered areas by attendees amongst various mezzanine and balcony levels as well as enhanced, unobstructed views of the venue’s stunning new stage from the dancefloor up to the elevated catwalks.

Led by Avant Gardner’s founder, owner, and chief creative officer, Billy Bildstein, The Brooklyn Mirage’s latest iteration boasts its most intricate and impressive design yet. A collaboration between Bildstein and new multi-media studio Conveyor, the new design features one of the world’s largest outdoor video walls at 200 feet in length and 30 feet high. Displayed over 1000 LED panels at 15K ultra-wide resolution, the roughly 30 million pixels will allow for film grade visual effects. With a custom-built media server and its processing technology, leading visual content creators from around the world will have the ability to go beyond traditional show visuals and create real-time generated experiences set in hyperrealistic environments, a first at this scale. With construction and roof design led by NYC-based construction studio HEINI, The Brooklyn Mirage’s new stage roof spans over 100 feet wide and 50 feet in depth and features an eye-catching floating effect as a result of its modular spaceframe system, the first fully domestically fabricated stage of its kind.

Kicking off opening weekend on May 5th and 6th, Swedish superstar Alesso is set to play two sets each night including the world premiere of his Eclipse set, alongside ‘Do It To It’ viral sensation, Acraze. To honor the brand new summer season, The Brooklyn Mirage will offer newly-updated and professionally curated food and beverage menus. The open-air musical sanctuary will re-emerge at full force with unrivaled talent. Bringing forth a myriad of immersive musical experiences like no other. The upcoming season boasts performances from Charlotte de Witte, Cuco, David Guetta, Disclosure, Kaskade, Marshmello, Tiësto and many more plus brand takeovers from All Day I Dream, Anjunabeats and Anjunadeep, Boiler Room, Ladyland Festival, Purified and many more events to be announced.

“The Mirage was always meant to adapt and change, to appear and to disappear. Every new generation of the Mirage innovates with new custom methods of building modular structures, as well as with non-traditional use of the latest multi-media and entertainment technology available. This year we’re introducing the third generation of our Mirage concept and while it will bring a lot of improvements and upgrades, and will set new standards on many levels, we found a way to keep the soul of the last generations alive.”