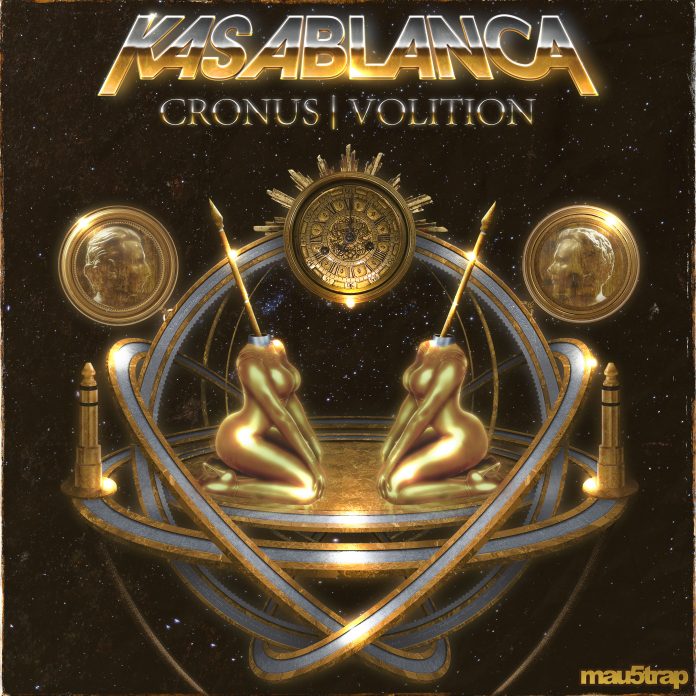 Blurring the line between progressive and melodic techno with their debut Human Learning EP, Kasablanca taps into 80’s analog synth nostalgia with their 6 track electronic masterpiece released on Armada’s Electronic Elements in November 2020. Kasablanca’s musical identity comes from their use of melodic retro textures combined with the rhythmic fundamentals of house & techno. Now they continue to do their thing with ‘Cronus/Volition’.

This new 2-track single is the confirmation of the project’s signature sound. Since their rise to stardom last year, the enigmatic pair is the amalgamation of their many influences, combining their love of analog synth-work and rich textural soundscapes to create a unique style all their own. With an enthralling live performance centered around analog synth nostalgia, Kasablanca has mesmerized crowds at Red Rocks, and live from the future for DJ Mag with their audiovisual experience.

Swathed in classic Kasablanca technical grit, ‘Volition’ powerfully follows the pair’s enthralling ‘Cronus’.  Hypnotic vocal chops echo throughout the nearly 5-minute track as oscillating kicks propel its fervent energy. A rapturous club-infused display of technical prowess, ‘Volition’ is suited for the underground. Seamlessly combining elements of both progressive and melodic techno. Kasablanca’s ‘Cronus’ debuted in November as part one of their two-track project. Traversing through tranquil breakdowns and blood-pumping build-ups, the duo stimulates the senses in ‘Cronus’ with overwhelming melodic abundance.