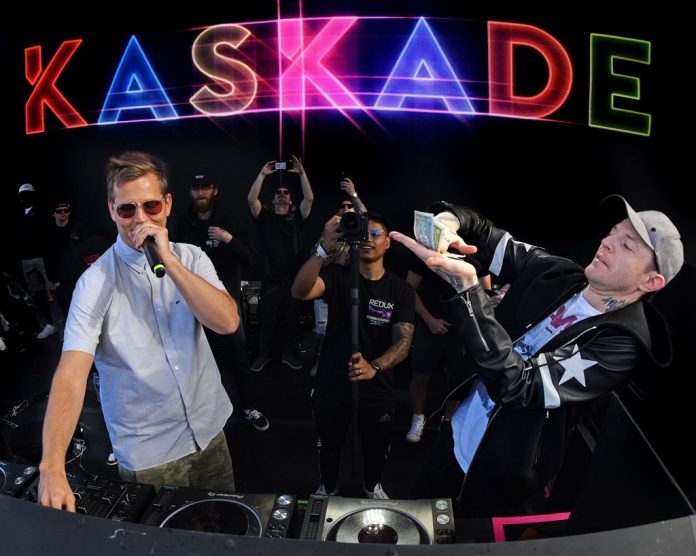 There are few songs in the realm of Electronic Dance Music that have the ability to transcend time. ‘I Remember’ by Deadmau5 & Kaskade is one of them. This past weekend lucky fans who attended Kaskade’s headline set at Sofi Stadium in Los Angeles were gifted a rare opportunity. Not only did the legendary Deadmau5 turn out to be the surprise guest, but the Mau5trap honcho also joined Kaskade on stage to close out the show. The song they played happened to be ‘I Remember’. If you’re a fan of either of these artists, I’m sure you know that this is one of their biggest songs. Seeing them play it together, is every ravers dream come true.

For a smooth 4+ minutes, the crowd in attendance was serenaded by the duo. To top it off, Deadmau5 even mock-sung the lyrics of the iconic song, which you can see a snapshot of below.

When the tune comes to a finish, Kaskade jumped on the mic and had the following to say:

“we’ve all been serenaded by Deadmau5 now, thank you Joel, love you bud, we’ve got time for one more”

Immediately after, a giant K5 flashes on the screen, which you can catch here, as well as below.

From here Kaskade plays a few more tunes, before calling it a night. While it still remains to be seen what exactly the mysterious ‘K5‘ is all about, the guessing game has already begun. Users on the internet speculate that it might be collaborative series of shows, similar to the Chris Lake x Fisher ‘Under Construction‘ Series. In addition to this, others have speculated that It might be a collaborative EP.

While it still remains to be seen what the whole ‘K5‘ business is about, it very well just be Kaskade’s Redux 005. I say this, as he ultimately finished off the show with the tune ‘Where Did You Go‘, the first single off of Redux 005.

The rest of the videos I’ve included are more of the same. The only difference is different vantage points, as well as varying lengths. If you’re a fan of Deadmau5, Kaskade, or just love I Remember like myself, then I’m sure you appreciate these videos. With that being said, check them out, you won’t regret it.

If you were in attendance I’m sure you can attest to how amazing this show was. If not, feel free to check out these YouTube videos, and relive the event yourself. I’ve gone ahead and linked Kaskade’s setlist, if you’re into that kind of thing, here. In conclusion, enjoy!