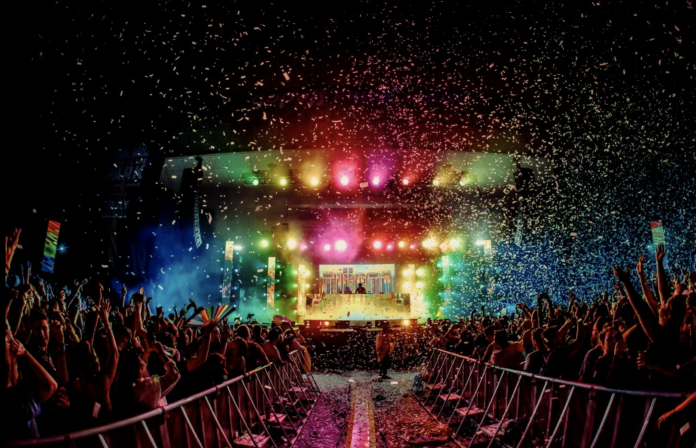 A Change In The Air

I don’t know about you guys, but June was something very special. It’s like we all began to feel again. The feeling of drive and motivation. It seemed that there were (and are) more reasons to smile. The camaraderie amongst our friends, family, and even strangers was and are very tangible. The feelings of kindness and love began spreading across our world. Don’t get me wrong – there’s still the presence of obstacles and struggle. But when June 1st hit, everything started to look a little brighter.

Stepping Up To The Plate

Enter Pride in the Park Chicago. This last weekend (June 26th and 27th), in Grant Park in downtown Chicago, a collective and dedicated group of people put in their all in order to present a one-of-a-kind diverse and inclusive celebration of Pride.

LGBTQIA+ celebrations are one of a kind. The presence of outstanding vibrant colors. The smiles across everyone’s face. The positive spirits that are all around. I really could go on and on. It is a truly brilliant thing to watch, support, and be supportive of. And it was an amazing event overall. Despite some very inconsiderate rain and thunderstorms on the first day, the show went on. Plus, the mud that resulted from the storms sort of added to the fun Saturday presented.

As mentioned above, some thunderstorms approached the area Saturday morning. As a matter of fact, a tornado siren or two a few hours before gates opened. However, that didn’t stop the Pride in the Park organizers from keeping the positivity and excitement up, even with attendees not even being at the venue yet. I continuously checked on their Instagram page for updates. Their story consisted of reposts of individuals getting ready – adding glitter to their already colorful outfits. Adding dye to their hair and the most amazing accessories. I grabbed a screenshot of the one post that basically gave me some excited goosebumps.

While some things had changed, such as the lineup schedule, everything still ran smoothly and that was with help from many of Pride in the Park’s outstanding partnerships. Perhaps the most important partnership was with Health Pass by CLEAR. It is a free mobile experience on the CLEAR app that securely connects a user’s verified identity to multiple layers of COVID-19-related health information to help reduce public health risk and get back to what they love. Obviously, even with the world opening back up, safety is still the biggest priority for organizers. With a few clicks and quick picture upload of the person’s vaccine card, it was easy for those to enter (or a negative COVID test within the last 48 hours). Luckily, Sunday was free and clear and full of sun.

The Most Impactful Partnership

Plus, Pride in the Park was partnered with The Center on Halsted. This particular place works hard to provide a safe and welcoming environment with programs and services for the entire community. Its programs range from volleyball, dance performances, and cooking classes to rapid HIV testing, group therapy, and vocational training. They also partner regularly with other organizations and groups from across Chicago and the nation to provide additional programming for the community. Check out more information here and see how you can get involved or even donate!

First, in the middle of May, the lineup was announced. Quickly after it was released, it began circulating around Facebook and other social media platforms at alarming speeds. Again, for it being the first Pride in the Park, it’s extremely impressive. I mean, the “Godfather of EDM”, Tiesto, performed for an hour and a half. He’s been in the business for 20 years. His song selection consisted of many of the genres he has touched in his entire career. In the beginning, the crowd heard ‘The Business’ which is his latest hit that has over 500,000,000 million streams on Spotify alone. It shows just how influential this man is in our dance music industry. Near the end, he touched on his trance side by playing songs he produced at the beginning of his career as well as a touch of his trance colleagues such as Paul Van Dyk.

Additionally, we had two more leading artists to headline this 2-day festival. On Day 2, Gryffin closed out the festival with a pure and energetic DJ set. Throughout the crowd, many Gryffin jerseys were spotted. The self-taught producer has made a name for himself and his Spotify numbers also show it. A special shoutout to this track for getting the crowd jumping. I saw many Shazaming it as fast as they could so they could continue dancing.

A dominating performance that comes as no surprise was the beautiful and mesmerizing Queen of Funk herself, Chaka Khan. The Chicago-native has one hell of a story. Her career is full of huge milestones which includes securing 10 GRAMMY awards. She was graceful on stage. This particular crowd stood out in a truly unique way. They were singing along so perfectly to her well-known tracks and dancing with each other. She is a legend and an icon. And as true legends do, they raise and support other artists, and that’s exactly what Chaka Khan did when she invited Mila Jam onto the stage with her. They both begin to sing Chaka’s iconic hit song “I’m Every Woman” and the crowd went completely wild. Why? Mila Jam is a Black Trans woman that is a singer, songwriter, dancer, actress, and LGBTQ activist – making this performance a first and a huge moment for the LGBTIA+ community.

Also, Betty Who was there! She came up on stage more than excited to be back. The Australian singer absolutely adores Chicago and its energy. The confetti rained down as the sun poke through just a bit on that rainy Saturday.

No matter what stage you were at, it was such a cool moment to catch one of the drag kings or queens walking to or from the stage in their flashy and breathtaking outfits. Again, despite the rain and mud, they all put their best foot forward to bring their exceptional talents to the stage and give the crowd more reasons to smile and dance.

On Day 2, The Vixen from the Emmy-winning RuPaul’s Drag Race got up on stage in a stunning outfit with matching accessories. She interacted perfectly with her dancers and brought in umbrellas that fit perfectly with the tone of the weekend. Everyone was also insanely impressed with Kinley Preston who STUNNED the audience with her stage presence. And, on the GoPuff mainstage, American Transgender Mila Jam performed her extremely popular songs such as ‘Better Days’ and demonstrated her beautiful dance moves.

Alyssa Edwards and Denali Foxx, fan favorites also from RuPaul, performed. Many couldn’t take their eyes off of Denali as she was in a stunning silver bodysuit that perfectly matches her silver hair. Her dancers accompanied her in futuristic outfits and perfectly executed the performance. Chicago drag queen, Miss Toto, braved the rain in a beautiful Beyoncé-esque two piece on Saturday. Alyssa Edwards wore the brightest outfit of the weekend. With a rainbow wig and a form fitting rainbow dress (and boa!), her energy matched the crowd.

Pride in the Park was everything. If only we could be in many places at once to see all the talent that went up on stage. It was truly breathtaking and inspiring. All the performers conveyed how proud they are to be up there and to be sharing their light.

And, guess what?! 2022 is already in the works! If you take a look at the website, there is a sign up box to fill out to receive emails about next year! Pride in the Park truly lifted Chicago’s spirits. Usually, the post-festival blues are very much a thing for the following days. But, maybe it’s just me. It was easy to wake up on Monday.

And it’s all thanks to Pride in the Park. Thank you for bringing the happiness to Chicago. For providing these days for all 13,000 that attended and were their true and authentic selves. Thank you for creating a safe space for all. Thank you for bringing even more recognition to LGBTQIA+ and allowing others to have access to more safe places and resources. This event allowed others to learn about the community and educate themselves. It reminded us of the history, the struggles, and the work that is yet to be done. But, this celebration brought us all together; many made friends and created memories that were completely necessary to make after this year. Remember all those feelings and emotions I mentioned in the introduction? Yeah, expect all of those to feel more present in the city and the US.

Check out the merchandise that’s available to purchase! I’m so impressed by the unique designs and variety of options there are. Got myself a tank top. See you next year, Pride in the Park. Rain, or hopefully sunshine, it’s going to continue to be the talk of the town! Now, sashay away. 🙂