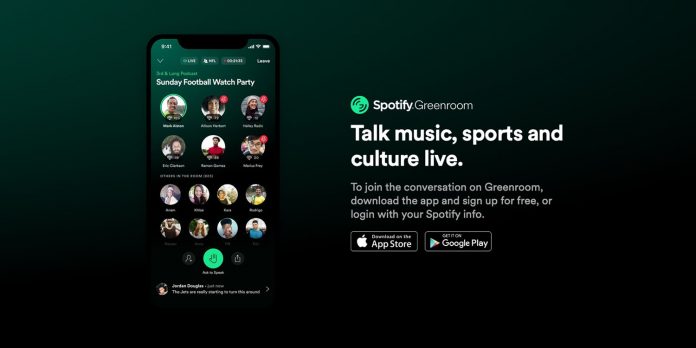 Spotify has just announced a new service available under their umbrella. This new service has come about as Spotify recently purchased the sports-centered audio application called Locker Room. The company did so in hopes of accelerating its entry into the live audio market. The service is available on both iOS and Android devices, as well as across 135 unique markets around the world. The service in question is that of the newly announced live-audio app, Greenroom. If you’ve ever used the popular Clubhouse app, then I am sure you are more than familiar with the concept behind Greenroom.

At the current moment, Greenroom is only focused on user-generated, live audio content, similar in fashion to its competitors, Clubhouse, Twitter (Spaces), and Facebook (Live Audio Rooms). In the future, Spotify plans to include new features to distinguish itself from its competitors. These are features such as programmed content, in relation to music, culture, and entertainment. It should be noted that Spotify/Greenroom plans to add sports content as well as that is what Locker Room was originally known for.

Ultimately, Spotify’s plans for Greenroom are to have it transition to more music-focused content, through its various Artists outreach programs. One such program is their newly established Spotify Creator Fund. The fund is intended to help creators in the U.S. generate revenue for their work in the Greenroom App. At the current moment, not much is known about the fund In regards to its size, how much creators can expect to receive, distribution time frames, or creator eligibility criteria.

If you are familiar with Clubhouse, Twitter (Spaces), and Facebook (Live Audio Rooms), then I’m sure this sounds like more of the same.  Some key differences are that Greenroom will feature a live text chat feature. The chat can be disabled at the host’s discretion. Hosts also have access to the audio file of their session once it is completed. This can then be edited and used as a podcast if need be.

One of the biggest key differences between Spotify’s Greenroom, and its competitors, is the fact that audio sessions will be recorded, and moderated by Spotify itself. This will all be for user safety, and for a greater user experience. These are both aspects missing from its main competitor, in Clubhouse.

Those interested in the Spotify Artists Fund can apply, here. For more information, be sure to check out the official website, here.