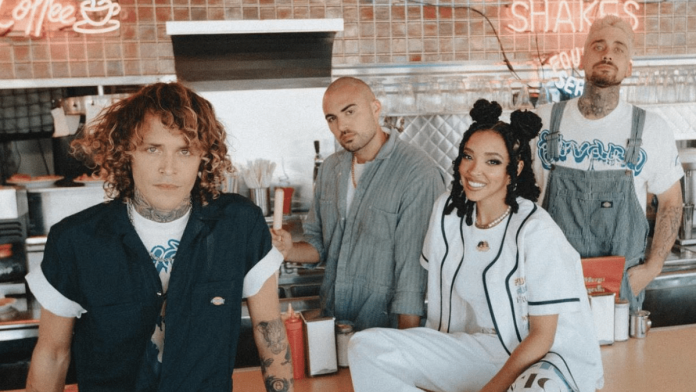 Cheat Codes have just unveiled the music video for “Lean On Me” featuring singer and dancer Tinashe. “Lean On Me” is the lead single for their debut album HELLRAISERS, PT. 1 and the track really highlights Trevor Dahl’s pop influence and sound.

The colorful video immerses fans into an uplifting story about overcoming difficult times with the help of others. Showing off her acting prowess, Tinashe conveys heartbreak after a man leaves her. She meets up with Cheat Codes at an empty swimming pool and is soon joined with skateboarders and dancers. They all start vibing together and her despair quickly turns into happiness. The group starts to venture out in a classic convertible, visiting a diner next to help a friend. As the sun sets, the party continues as they bring it to the junkyard. As they dance the night away to the addictive melody, Trevor is seen walking alone with a girl. An unexpected ending occurs, leaving fans wanting to know more.

“Lean On Me” sets the tone for the album HELLRAISERS, PT. 1. The album is filled with exciting dance beats and diverse pop vocals. Some other artists featured in the album include Marc E. Bassy, CXLOE, and Au/Ra. The name of the album was inspired by their late manager, Michael Theanne, because he would call them “Hellraisers” as a nickname. The three-part album will focus on each member’s distinct style.
Cheat Codes is an EDM trio consisting of Trevor Dahl, Matthew Russell, and KEVI. The Los Angeles hit-makers have been well-received both domestically and internationally as they’ve been consistently releasing good music, such as the chart-topping  “No Promises (feat. Demi Lovato)”, “Who’s Got Your Love (feat. Daniel Blume)”, and “Only You (feat. Little Mix)”. They’re known for their unique sound that combines dance, pop, and hip-hop.