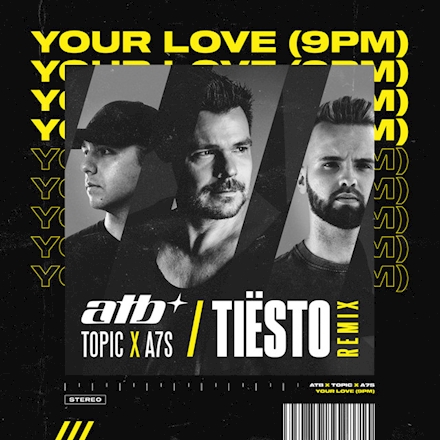 Tiësto is back in business with his remix of ATB’s legendary track ‘Your Love (9PM)‘ with A7S and Topic. Most of you should know this one, and find its added twist to be quite spicy. We’ve followed Tiësto throughout the years, keeping an eye on his singles and remixes. Proximity’s Youtube channel has this track out and he provides the perfect vibes for it.

The original song came out last year in January, which is already a remake of ATB’s 1999 hit ‘9PM (Till I Come)‘. With so many layers to the production of this song, the great artists involved made a true banger. It is emotional and smashing in every way. From the striking bass line to the heartfelt lyrics, there is no way this song can’t be played live. In the remake, A7S’s vocals soar and the guitar hook is just a chef’s kiss. The trance energy is radiant and nostalgic. It’s everything we want and possibly need in dance music.

For the remake, it just made sense with the group he got together.

“Over the past 20 years, I’ve received so many requests for collaborations, remakes, and cover versions of my song ‘9PM (Till I Come)’ but I passed on them all because I was never really satisfied with the sound of the approach nor the final. Then I listened to Topic’s ‘Breaking Me’ together with Rudi (management) and we immediately had the feeling that these two sound worlds could fuse together perfectly.”

ATB, to The Nocturnal Times

“‘9PM (Till I Come)’ is an absolute dance classic that I’ve known and loved since I was little. It is therefore a great honor to be the first to reissue this number together with ATB. The typical ATB guitar riff paired with my ‘melancholic dance music’ sound and the unmistakable voice of A7S results in a perfect symbiosis!”

Topic, on ATB, to The Nocturnal Times

ATB’s OG track will live on as a dance classic for those that know. It topped the UK Official Singles chart when it came out. It even opened the door for EDM on mainstream radio in the United States after entering Billboard’s Top 10 Dance Club Songs chart. They’ve had an outstanding journey throughout their career and Tiësto honors them with this remix. It’s a pop of fresh air to an iconic 90s dance track.

Stream the mix to this lovely modern anthem below.