Home Music XANDOR Teams Up With Vocalist Katie Dicicco To Bring Us A Pop...

Making his EDMTunes debut is deep house maestro, XANDOR, and he’s bringing vocalist Katie Dicicco along for the ride. XANDOR is a DJ/Record Producer, who has come to be known for his take on the future deep house genre. His music contains silky, sensual soundscapes. If you’re into this kind of stuff, I think you are going dig it.

When asked about ‘Insatiable’ XANDOR had the following to say:

“The inspiration for insatiable came after attending Zhu’s show. I’ve been a huge fan of Zhu’s music for a while, he’s a big inspiration for my music. I remember seeing a live saxophone & electric guitar player and I wanted to create a song with a sexy vibe using those same elements. I found my self brainstorming ideas around the word “Insatiable”.”

“I came up with the concept when your deeply in love and you keep wanting more and more of the same person, and you cant just get enough. The definition of insatiable is “(of an appetite or desire) impossible to satisfy.” and thats something we feel when we are deeply in love.”

On how he came to work with Katie DiCicco:

“I remember finishing the main idea and that same night a random song came to mind from 2010, I then started googling and searching for this song online “2010 edm song popular” I finally found it, it was Chica Bomb by Dan Balan. Let me tell you it was a very weird thought that came to me that night out of nowhere, it almost feels like it was meant to be because I havent thought about that song in forever. I then read the wikipedia about the song and it said “featuring uncredited vocals from American recording artist Katie DiCicco”.”

He finishes up by touching on the tracks overall vibe, and completion:

I then messaged Katie and lucky for me we got in touch! I brought the concept to Katie and she wrote the song with Will Jay. I’m really happy about this collaboration because Katie’s vocals fit perfectly in this song it brings that seductive feeling and you can feel that emotion when you’re listening to this record.

After giving ‘Insatiable‘ a listen, it’s easy to see that XANDOR knows what he’s doing. In addition to that, it’s not hard to tell that the chemistry between XANDOR & Katie is so rich, that you can almost feel it. After having heard ‘Insatiable‘ a few times, I can’t help but be reminded of artists such as Loud Luxury, & Martin Solveig. If you’re into artists like these, you might want to give this a listen.

With a run time of 2:50, this one goes by quick. If you’re a fan of huge horns, beautiful vocals, or just good music, ‘Insatiable‘ is for you. XANDOR’s new tune ‘Insatiable’ featuring Katie DiCicco is out now via self release, and can be streamed below, enjoy. 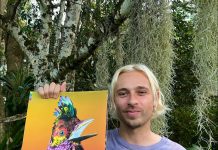