If you haven’t heard, GRAVEDGR just released his debut album ‘6 FEET UNDER‘ via Heavyweight Records. The man behind the mask shares a personal story of inner conflict, destruction, and chaos. Just a few years after releasing his debut single, ‘RAMPAGE‘, the world finally gets to know and understand who GRAVEDGR is.

GRAVEDGR burst onto the scene in 2017 when Carnage introduced him to the world. Nobody knew who this unidentified person (and shovel) was. Since then, GRAVEDGR has played major festivals around the world, released 7 singles, a remix EP, and continues to grow. In addition, his debut album, ‘6 FEET UNDER‘, already has more than 23 million streams. So, who is this eerie figure? GRAVEDGR did an interview with us and we found out exactly who the mysterious producer is.

What is the story of GRAVEDGR? What do you think separates yourself from other artists in the scene right now?

“The GRAVEDGR story is simple to be honest. Years before I started making music, I would work in a cemetery with my father digging actual graves. I guess all that time being in a melancholy environment subconsciously inspired me to make all this dark, heavy music. I think what separates me from other artists in the scene is not only my sound, but my brand that goes perfectly with my records.”

Your new album, ‘6 FEET UNDER‘,  is finally out. Can you tell us about the collaborations on the album? How do you want fans to interpret your vision for this album?

“The album probably has my biggest, hardest, and coolest collaboration tracks I have ever made. ‘FICK DICH’, ‘SHALLOW GRAVES’, MOVE’, and ‘ALL I WANT‘ are a few of the [collaborations] on the album. I can’t tell you which is my favorite, but I am 100% sure you will love all of them.
I want fans to interpret the album as an experience of a nightmare. Everything that was done on the album was done for a reason, from the artwork to the track list order. I could talk about it all day, but I’ll just give you an idea of how I want you to [interpret] it. The intro of the album is a prayer and the entire album is your worst nightmare. The closing track of the album is ‘MONSTERS‘ with Lit Lords. That track has more of an uplifting vibe because it talks about how it’s ‘not the end’, hinting to many things. You can interpret that anyway you want.”

The collaborations were my favorite songs on the album, and GRAVEDGR knows you’ll like them too. But stay tuned as this is not the end of GRAVEDGR. We’ve only seen the first chapter of this destructive journey.

How would you describe the sound of the “6 FEET UNDER” album, and how is it different from your past releases?

“[It’s] quite simple honestly. HARD AF! In this album, I really wanted to push myself in trying new sounds. I really tried to put more than just trap & hardstyle in there. I think the last records on the album really show where the future of the hard sound is going.”

There’s no doubt that this album is game-changing and next level. Producers will be looking to this album for the next wave of hard music. GRAVEDGR closed the album with some banging drum n’ bass, showing a clear direction in where he believes hard music is headed.

Can your fans expect an upcoming tour? Are there any major cities you will be hitting that you can hint to us?

“I am starting my album tour on 2/22 in El Paso, Texas. I’m going to be adding phase 2 soon! I can’t say much on what cities I have planned, but I am reading all your comments and my team is working really hard to bring my tour to a city near you.”

You can get your tickets to the “6 FEET UNDER” tour right here.

By being a avid video gamer, how have video games influenced your unique style of music? Is there a particular game you pull the most inspiration from?

“I never really thought about that until now. I play this one video game called ‘Tom Clancy’s Rainbow 6 Siege’. That is one of the most intense first person shooters I have ever played. The intensity of that game has definitely inspired me to carry on that feeling through my music.”

What does dance music/ Dubstep & Hardstyle mean to you? Why do you feel this genre is important to the EDM community?

“Dance music to me is an escape from the real world. If you’ve ever heard the track ‘FTS‘ By Showtek, the lyrics in the breakdown pretty much express my feelings towards music. ‘Why should I take life so serious? I just want to do what I like to do, being far from reality cause I can’t stand society…’

I think this genre is important to the community because [it] really lets you take out all your frustrations from the real world. [You’re able to] let that shit out listening to it on a loud system. That’s all I can think of because that question is super opinion based.”

Do you have any advice for upcoming artists who are trying to make it in the scene?

“I would say to always think of what is next in the scene. You are the future of the scene, not the present. I say ‘not the present’ because if you think in the present, that leads you to keep making the [music] that is in right now. I personally think that only gets you so far. Secondly, try to make music that makes you stick out like a sore thumb. What I mean by that is [you should] make something that makes people immediately think of you when they hear it. Lastly, be humble and be patient. Your time will come. That goes a long way.”

In two sentences, how would you convince an EDM fan that has never seen one of your performances to come check out your set at a festival or come see you on tour?

“If you’re ready for the hardest live performance you’ve ever seen in your life, please stop by. Also, no p*ssy sh*t allowed because we are here to rage.”

You heard him. GRAVEDGR is going to bring his path of destruction to a city near you. Get your tickets to the “6 FEET UNDER” Tour here.

So there you have it. If you didn’t know who GRAVEDGR was before, now you have a better idea. He is a man on a mission to hurt and kill bad people. His debut album, ‘6 FEET UNDER’, is a journey into the dark and twisted mind of our murderous anti-hero.

I’m personally a huge fan, so it was awesome getting so much insight on the album and story of the masked producer. So here’s a special thank you to GRAVEDGR for taking the time to answer questions and share his story with me.

You can stream ‘6 FEET UNDER‘ down below. Also, go see GRAVEDGR on tour by clicking here. 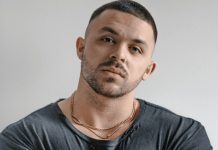 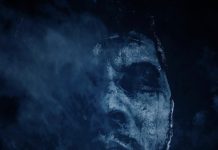 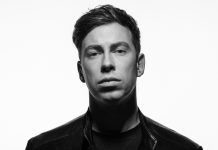