Tomorrowland hosted their first-ever “Our Story” Event to celebrate 15 years of the festival’s existence. The event took place during Amsterdam Dance Event and attendees were able to choose to attend two nights: Thursday and Friday. We were there to cover the Friday night, and here is our recap.

This 15 year-celebration took place in the famous Ziggo Dome with 28,000 participants across both days. Doors opened at 6pm and the event ended at 11pm. This may appear to be quite early, but it allows you to have a good night’s sleep or keep going with another ADE event.

Attendees were able to purchase food and drinks through tokens traditionally used by Ziggo Dome for similar events. You could also buy Tomorrowland merchandise if you wanted to go back home with a souvenir. It was easy to see the festival’s expertise in action with smooth and well-managed access to the venue, service at bars, lockers, and food stands.

Tomorrowland wanted this event to bring the festival’s magic to Amsterdam in one night. The lineup did just that, and included some of the most iconic names of Tomorrowland.

The list had more than 10 artists. Afrojack, Armin van Buuren, Dimitri Vegas & Like Mike, Goose, Netsky, Push, Steve Aoki, The Bloody Beetroots and Tiësto brought their ultimate Tomorrowland classics. Timmy Trumpet made a surprise appearance during Dimitri Vegas and Like Mike’s show. Metropole Orkest – made up of 1 conductor, 53 musicians, and 20 vocalists – was also part of the celebration.

A beautiful 37.5m-wide stage was the main piece at Ziggo Dome. When looking carefully, you can see that it was actually the upper part of this year’s Tomorrowland mainstage. 3 elevators were built into the stage to bring live acts on and off.

In order to create a full Tomorrowland atmosphere, nothing was forgotten. Audio, video, lights, indoor fireworks, dancers, acrobats and special effects were all brought into place. With this incredible level of production, visitors were able to enjoy a journey into the 15 years of the festival’s existence.

The orchestra started the show by playing the Tomorrowland anthem by Hans Zimmer, followed by their versions of some iconic electronic music tracks. The crowd got to enjoy orchestral versions of ‘Café Del Mar‘ by Tale Of Us, ‘Opus‘ by Eric Prydz and the hit ‘Losing‘ It by Fisher. Regardless of whether you already saw the orchestra in Tomorrowland, watched the videos on Youtube or were discovering it for the first time, the performance was purely beautiful. Goosebumps guaranteed.

After this first part, the symphony did not get off stage but rather stuck around and supported all DJs during their acts. With this, we were sure that the magic would remain for the rest of the show.

The first to kick off the DJ shows was Push with his ‘Universal Nation‘, then Goose with ‘Synrise‘. The two tracks were the perfect transition from the symphonic side of the show to the electronic one. Netsky was up next and got the room temperature higher with his track ‘Rio‘ alongside with dancers in Rio’s carnival costumes.

Afrojack played just afterward and sat the tone to a more EDM-sounding second part of the night. From the moment he dropped ‘Turn Up The Speakers‘, Ziggo Dome was on fire and kept going that way with ‘No Beef‘.

With a crazy crowd, big production, beautiful pyros, confetti, and an MC to make everyone go wild, you could definitely see that Tomorrowland was in the building. This wasn’t just any Tomorrowland show, either. The symphony playing along with their tracks was an incredible combo.

At this point, we knew where the party was going and everyone was loving it. Steve Aoki followed next and kicked off with his famous collaboration ‘Melody‘, then went on with his biggest hits like ‘Pursuit Of Happiness‘. At this point, the following act seemed obvious. The Bloody Beetroots‘ appeared on the stage and it was time for ‘WARP‘.

Next on was trance legend Armin van Buuren, who didn’t lose any time and started by playing ‘La Résistance De l’Amour‘. Susana joined the stage afterward to perform their collaboration, ‘Shivers‘. Trevor Guthrie joined next to perform his collaboration with Armin, ‘This Is What It Feels Like‘.

Armin’s set was followed by one of the night’s highlights, which was the orchestral tribute to Avicii with ‘Wake me up‘.

Up next was Tiesto, who played not only his current hits and big tracks but the old ones also. It was quite a nostalgic moment listening to ‘Adagio for Strings‘, now with an orchestral background. The Dutch DJ played one of the longest sets. This allowed him to travel back in time with tracks like ‘Lethal Industry‘ and come all the way back with ‘The only way is up‘, ‘Secrets‘ and ‘Boom‘.

The last act was by Belgian brothers Dimitri Vegas & Like Mike. The Tomorrowland icons played their biggest Tomorrowland classics starting off with ‘Ocarina‘. The show went on with multiple bootlegs and mashups with tracks like ‘The Hum‘, ‘Mammoth‘ or ‘Rave Control‘.

Australian artist Timmy Trumpet joined the stage during the set for the classic dancefloor sit-down. Everything was there to make the party heat up even more. Every piece of the visual show that was in the Ziggo Dome that night was in action during this act.

When Tomorrowland organizes one of its many events, you can be sure that it will live up to the festival’s high standards and fans’ expectations. For sure, a night at the Ziggo Dome cannot replace the festival’s true experience – but it was an amazing experience regardless. If you are feeling nostalgic already, want to experience the Tomorrowland magic in October or just want to give your not-so-into-electronic music friend a taste of the magic, this is definitely the event for you.

We do not yet know if a celebration event will happen at ADE again next year. Maybe it’s the start of a yearly ADE Tomorrowland event, or maybe it’ll be only for milestone anniversaries. Until then, we can only wait for the full show video and the aftermovie.

The event was broadcasted live on Friday through Facebook, Youtube, and Tomorrowland.com. So we hope Tomorrowland will release an official video soon. 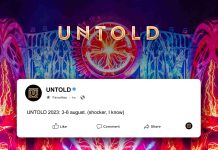