Ultra Japan just introduced us to the first phase of their upcoming lineup taking place on September 14 and 15. Pitting traditional names on the Ultra lineups, they’re hosting Afrojack, DJ Snake, Galantis and Steve Aoki. Jumping from that point, Pendulum‘s Trinity show is listed which grabs attention.

Earlier in the year, Pendulum’s Trinity were announced replacing The Prodigy‘s spot at South West Four. In more detail, this will mark its debut which features Rob Swire, Gareth McGrillen and Paul Harding (AKA El Hornet). Fortunately, Trinity will be touring after that point and now we know that Japan is on their radar.

The Ultra event is marked to take place at Tokyo‘s Odaiba Ultra Park II. Since they only announced phase 1, expect to see many more names as phase 2 is coming soon.

If you want an idea on what to expect coming to this rendition of Ultra Japan, take a look into 2018. Separating Aoki and Pendulum, the three aforementioned DJs performed. Furthermore, the festival set stage for Armin Van Buuren, Nicky Romero, Nina Kraviz, Steve Angello, and many more. Notably, Tchami and Malaa showed up with No Redemption while having John Digweed and Nicole Moudaber go B2B. Finally, after the event’s completion, Ultra released a 4k official aftermovie on their YouTube channel. Take the time to watch it if you’re looking for something to excite you regarding what’s to come.

Looking to go to Ultra Japan for this year? You can find the tickets and more information in the link here. 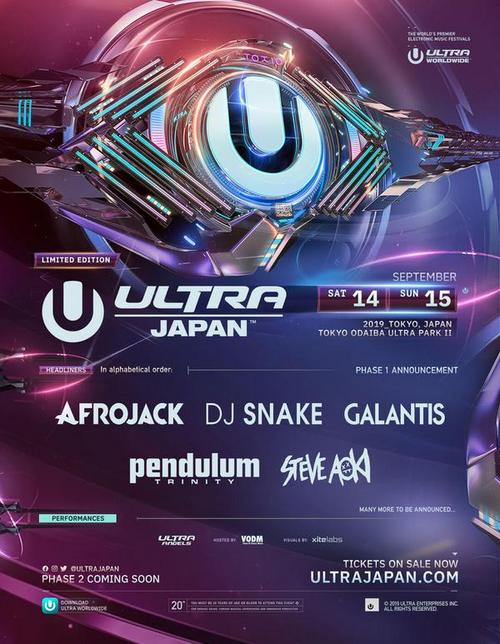