After a wildly successful inaugural 2018, SHINE Ibiza Season 2 has been announced! The popular all-trance takeover will return to the famed White Isle packing more punch than ever. Whereas 2018 saw SHINE in the Vista Club at Privilege on Monday nights, Season 2 will bring back #TRANCETHURSDAYS to the legendary club Eden.

The lineup reveal is just as amazing as the upgrade in venue. Headliner Paul van Dyk will take the decks for all 11 events. As an appropriate kickoff and bookend, he will be joined by uplifting trance maestros Aly & Fila for two separate 3-hour XXL sets on opening and closing nights.

With firepower like this, SHINE is shaping up as THE trance destination for the Summer. With their lineup, their goal is to “place max emphasis on crowd-drawing spinners who embody the truest form of the genre.” SHINE also revealed a new partnership with Tomorrowland in Belgium. They have taken over the signature “Freedom” stage, the second largest stage at the festival.

Paul van Dyk had this to offer on the new location Eden:

“ON MY LAST TRIP TO IBIZA THIS YEAR I DROPPED INTO THE FULLY REDEVELOPED EDEN. I WAS BLOWN AWAY TO SEE HOW THE VENUE WAS MODERNIZED AND REFINED. I’VE PLAYED THE BEST AND MOST EXCITING VENUES IN THE WORLD AND THE NEW EDEN IS EXACTLY THAT. TRANCE AND EDEN HAVE A CLOSE RELATIONSHIP/SHARED HISTORY THAT GOES BACK DECADES. IN TANDEM WITH THE DESIRE TO HAVE THE NIGHT BACK ON THURSDAYS, I’M DELIGHTED TO SAY THAT SHINE WILL BE MOVING TO THE CLUB FOR THE UPCOMING 2019 SEASON.”

Wow. Things are only looking up for SHINE Ibiza in Season 2, so get your tickets now! Check out the full lineup and club dates below! 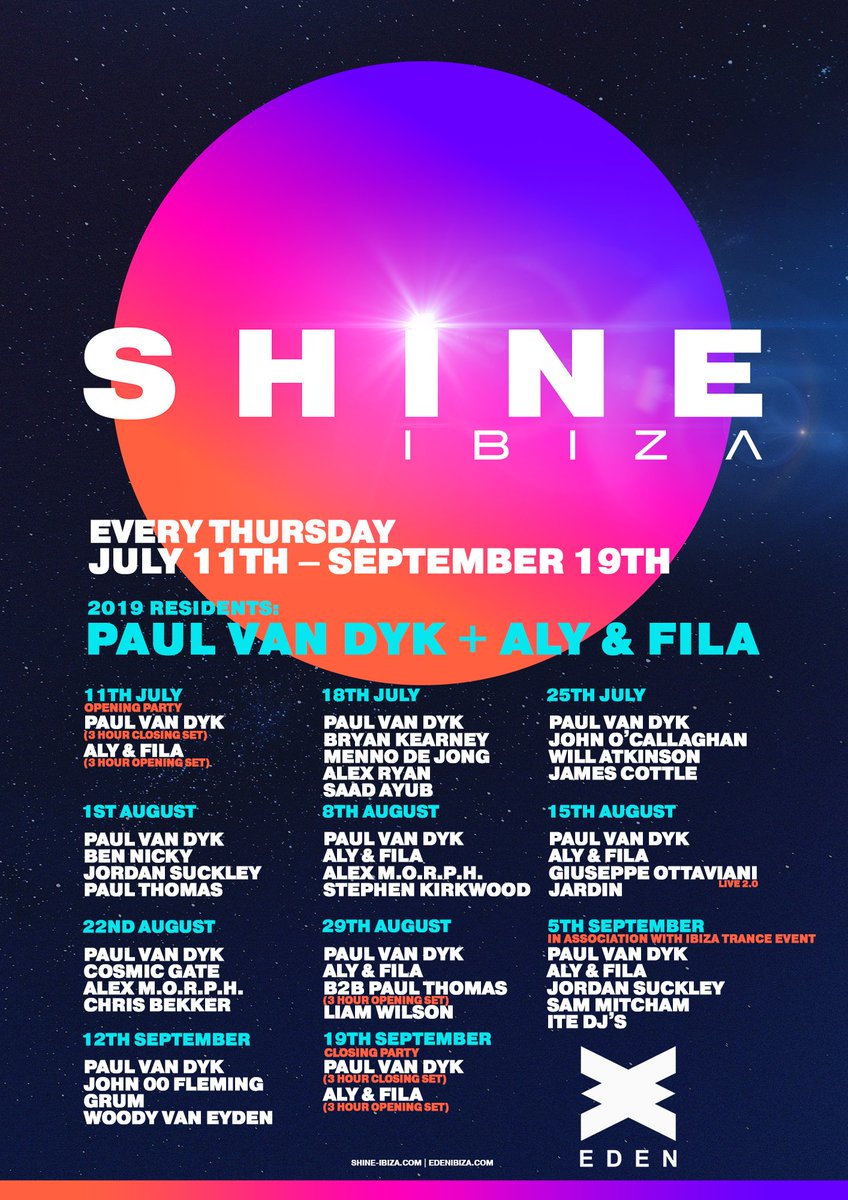