Home Events HARD Day Of The Dead Back From The Dead 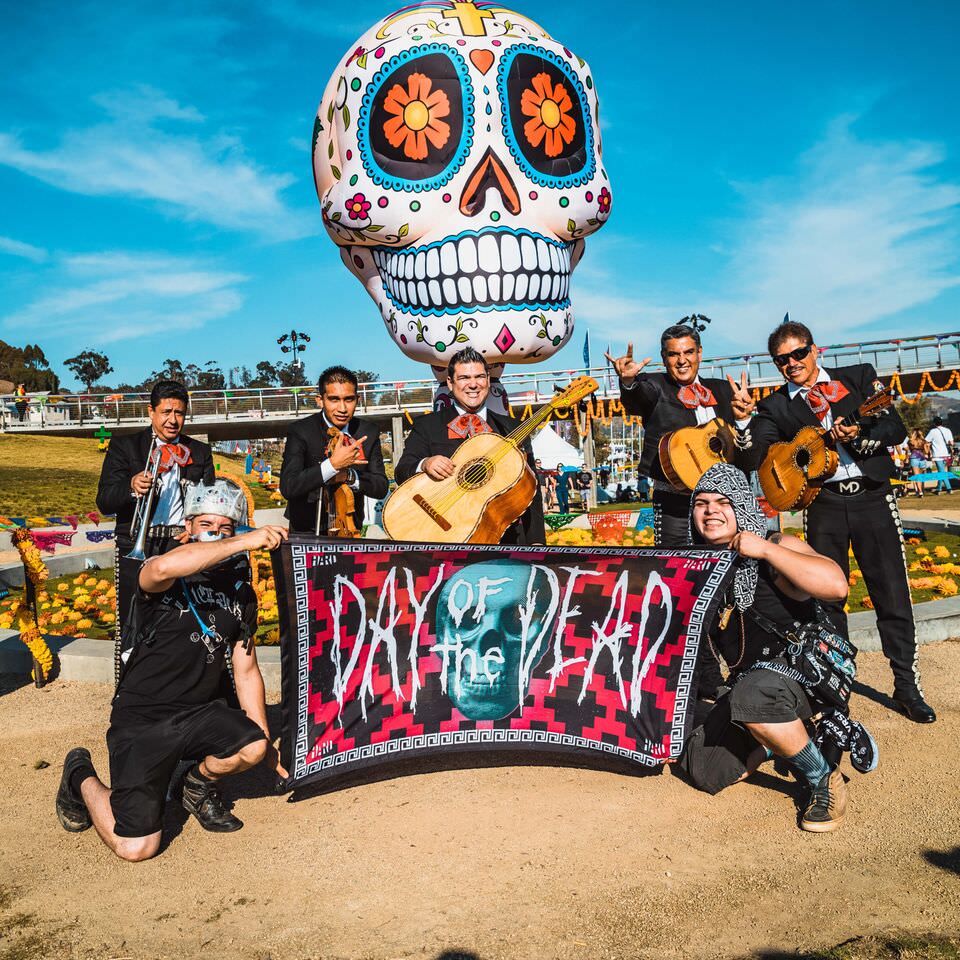 HARD Day Of The Dead Comes Back From The Dead

The park reopened earlier this year after going through a renovation, and it showed. Having gone to Insomniac’s “Zedd In The Park” at the same venue earlier this year, it was nice to revisit the park and see it in a different light.

Day Of The Dead

As I entered and met up with friends, I enjoyed the sounds of Omnom and his wonky take on house music. I quickly left the group of friends and headed over to try and get my face painted, as HARD was offering free face paintings in their VIP section. Unfortunately, the line was longer than I had hoped, and that didn’t end up happening. I opted instead to grab a drink, to which I was impressed by the selection the bars were offering. I decided on a Cherry Vodka Cocktail and made my way to the main stage.

As I approached, and the sun was setting over Downtown LA, I caught the closing moments of Cashmere Cat’s set, to which he dropped Virtual Self’s ‘Ghost Voices’. The crowd was loving it, and it was at this point that I decided to jump in and follow suit. His set ended, and the crowd grew quiet, we knew what was coming and we couldn’t’ be happier. Knife Party took the stage, and we all lost it.

For an hour, we were transported back in time as Knife Party’s set was nostalgic as can be. It was awesome to see them play, as they had also been at HARD Day Of The Dead back in 2014. Only one member made it out for the show, which was Gareth McGrillen, but it was worthwhile nonetheless. I hadn’t seen Knife Party since 2012, so this made it all the much better. They dropped everything from Sebastian Ingrosso’s & Tommy Trash’s iconic track ‘Reload’ to 2011’s ‘Bang Bang’ by La Puente.

Blending tunes both current and old, Knife Party devastated the LA Historic Park. My only gripe was that we didn’t get a chance to hear “Internet Friends” played live. He teased us with the intro to only to not play it. He claimed that their set got “Cut Short’, oh well. They played loads of their other music, and it was amazing. Check them out if you ever get the chance.

Next came a 45-minute changeover, as the mainstage production crew prepared the stage for Die Antwoord. I wasn’t really looking forward to this, so I decided to explore the venue and check out what HARD had to offer. Their menu included everything from Gourmet Mac & Cheese, Lotta Tots, and even Bulgogi Korean BBQ. I opted instead for a Churro, from the Churro carts that were sprung around the venue, and I was pretty happy with my decision.

I managed to catch a bit of Rodriguez Jr. live and was pleasantly surprised by the variety his set included. I couldn’t name the tracks he dropped, but it was enough to keep the groove going, and maintain the overall vibe that HARD was presenting. After a while, I made my way back to the MainStage, and was serenaded by a group of Mariachi’s playing ‘La Chona’. I finally ended up at the main stage, only to be hit with a thick wall of bass.

Die Antwoord had taken the stage, and they were destroying the dance-floor. I won’t go as far as to say I was a fan of the South African Hip-Hop group prior to the event. I knew who they were, and had even watched a film that they starred in, but if you asked me to name a track from them, I would draw a blank. After seeing them live, this opinion has definitely changed, and I will definitely be seeing them again. The energy they bring is unreal, and the music in their discography is out of the world.

After hearing some of their stuff, I made sure to Shazam the tracks, so that I could add them to my personal music library. One track that sticks out, in particular, was ‘Ugly Boy’ by the Capetown based group. If you haven’t had a chance to listen check it out here. It contains a straight sample of Aphex Twin’s ‘Ageispolis’, which is awesome. When paired together with Ninja and Yolandi’s trademark vocals, the results are nothing short of epic.

Next came another 40-minute changeover, only this time the sounds were provided by Thee Mike B. I scrambled away from the Main Stage and made my way over to Shiba San. At this point, he had already been playing for over 15 minutes. I took a minute relax, and enjoy the scenery, as the park was littered with skulls, gravestones, and tons of other Instagram worthy photo-ops. After some time I returned to the MainStage, to catch Justice.

In all honesty, they were the reason I attended HARD Day Of The Dead, to begin with. I had been waiting for nearly a decade to see the elusive French duo that is Justice. I am happy to say that I was not let down at all. They played all of the tracks that we’ve come to expect, including the stuff off of their new ‘Woman Worldwide’ album.

I left the stage a bit early to catch Lee Floss’ b2b set with Felix Da Housecat and was left happy with my decision. This was the perfect way to wind down the night, as some of the earlier acts sapped the copious amounts of energy I walked into Day Of The Dead With. Floss & Felix kept the groove going until the show ended, and the vibe was just right.

HARD Day Of The Dead was held the weekend after Insomniac’s Escape. Due to this, I wasn’t sure if it would be able to live up to previous weekends debauchery. I have never been more wrong. HARD has proven time and time again that they are more than capable of putting on top-notch events. HARD Day Of The Dead is another shining example of that.

After 2015, HARD Day Of The Dead went on a three-year hiatus, only to return in stunning fashion. We would hate to see this action repeat, as this writer is greatly looking forward to attending next year. If you had the chance to be in attendance, you know exactly what I’m talking about. If not, be sure to make it out next year, you won’t be disappointed.