When it comes to festivals on water, expect the extraordinary. However, from October 10th to the 14th, Groove Cruise Cabo 2018 made its way to an unexpected destination. Due to the unforeseen circumstance of Hurricane Sergio, the amazing Whet Travel team rolled through all the punches and made ‘ship’ happen. Departing from San Diego to Ensenada, 2,600 attendees boarded the beautiful Norwegian Pearl. They experienced the best logistical marvel the West Coast has ever seen.

Veterans of this event know the excitement of it all. Checking in at the terminal to boarding the ship, you know the adventure is about to begin. From the moment you step on board, you’re welcomed with open arms, a set time schedule/wayfinder in hand, and plenty of good vibes. For any virgins of the event, GC does well in acclimating them through a meetup group.

With 8 stages, each themed to a different label, Captains danced from dawn until dusk over the course of 96 hours. 13 decks from the front, middle, and back hosted something for everyone. Themed parties day and night make the experience even better. As fans flapped and dancers shuffled, there is no other nonstop party like this one.

If you’ve never been on a Groove Cruise, do yourself a favor and experience this marvelous opportunity at least once.

First days always come with challenges, but it’s the dedication of the company that makes GCFAM coming back for more. Set times shuffled around but the show went on. While waiting to embark, Ahlex Diego, Felix Cartal, Damaged Goods, Liquid Todd, and others played the Sail Away party. People dressed to the ‘Out of this World’ theme. Headliners Benny Benassi and MK filled the Atrium with beloved house music we crave. Laidback Luke hosted a kung fu class and then killed it with a deep set in the Stardust Theater. Guests were also treated to the talents of the Stereo Productions X Deep LA, MixMash Records, and Descend labels. Anyone passing through the Casino enjoyed mighty fine house tunes as well.

Captains woke up to the ship docked at Ensenada. Groove Cruise’s philanthropic Whet Foundation had volunteers participate in their Destination Donation in the morning. Decked out in tutus and ties, attendees ventured the streets. The club venue, Papas & Beer, awaited those coming to Duke Dumont’s Blase Beach Club event. Om Nom and Huxley opened for the ‘Ocean Drive’ artist. The Brit treated everyone and Mexico to an exciting deep house set. Adam Auburn and Felix Cartal followed with bits of house and tech house as they brought Ensenada to a close. With balloons, beer, and tacos, the crowds left satisfied. 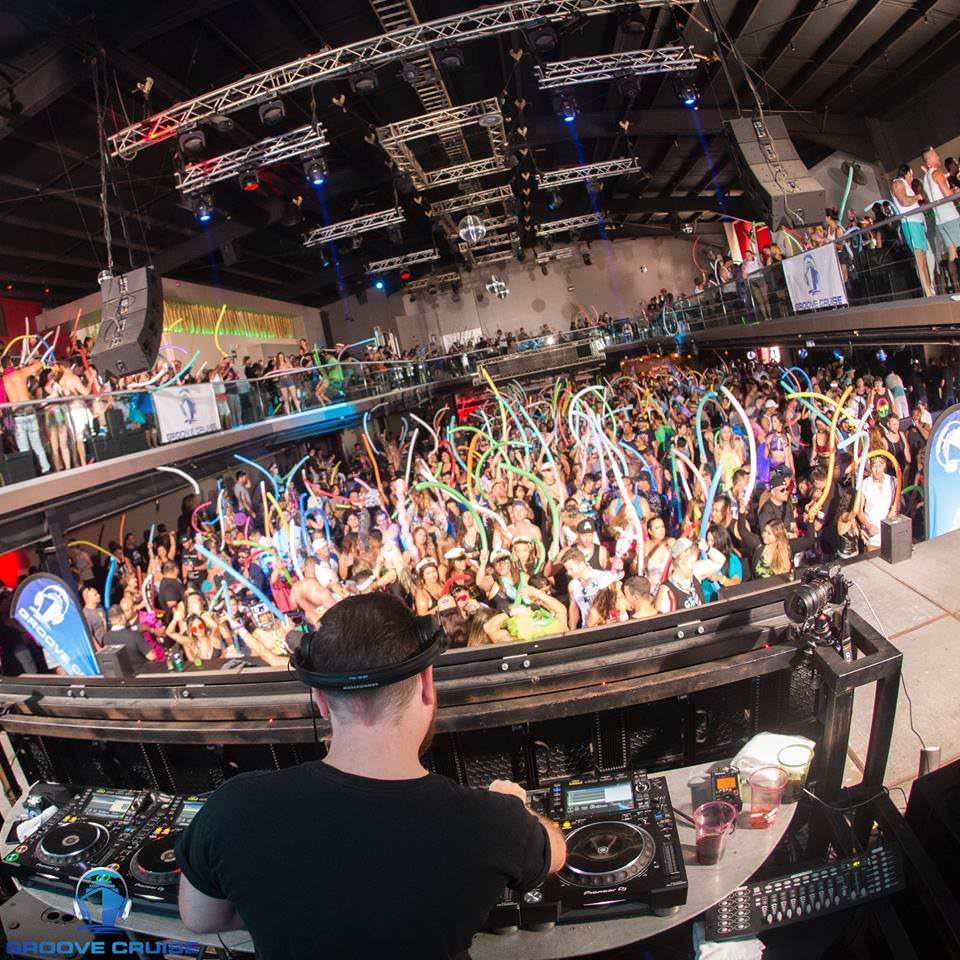 Back on ship, Relief Records had ALX, Sage Armstrong, and Green Velvet bring the pool deck down. 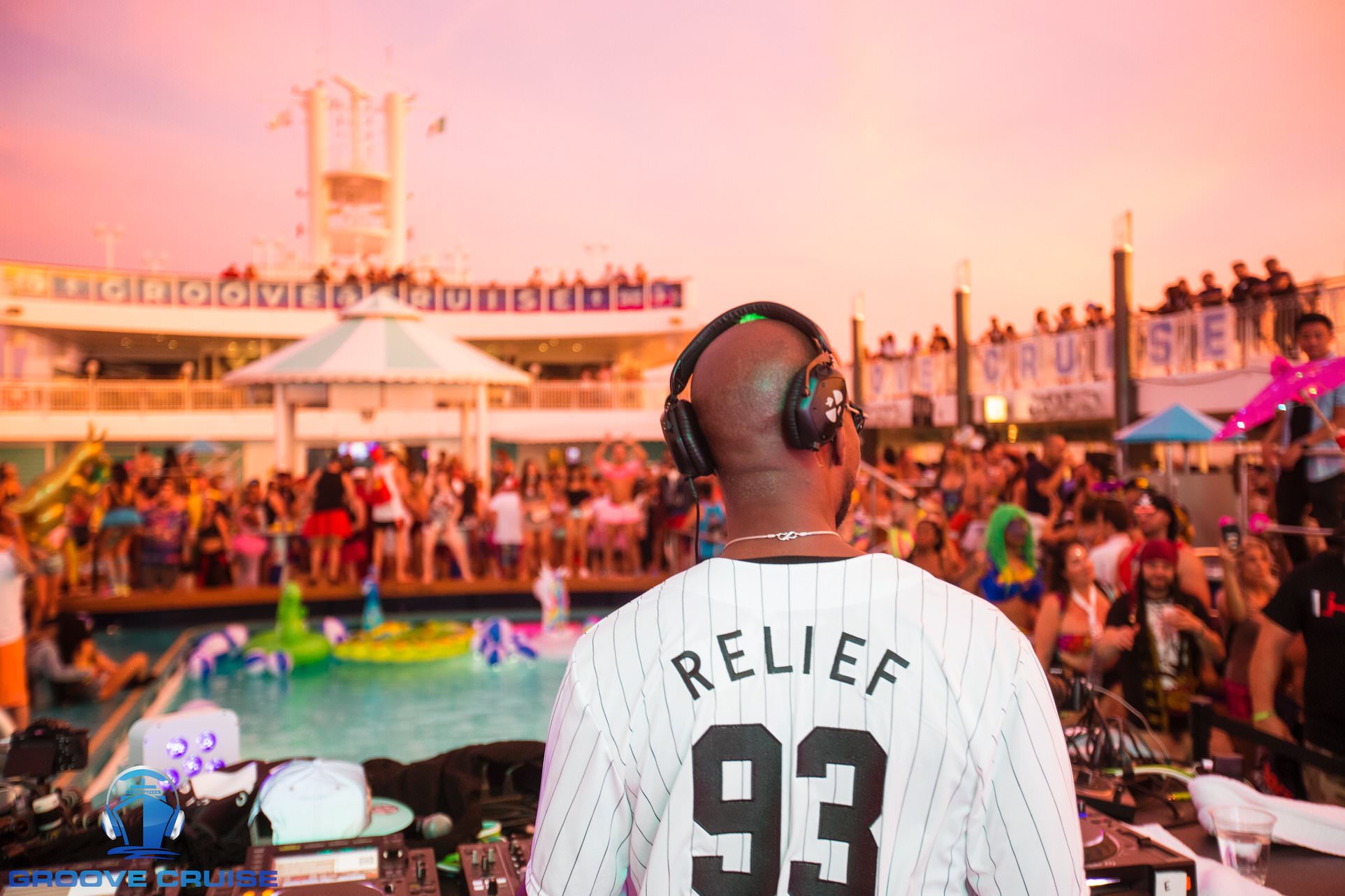 Twister – GC Fam style took place in the corner, where everyone got wild. As night fell, attendees emerged as Pirates. The Dancetronauts and Laser Assassins performed trap, a little bit of dub and a ton of lasers in the night. Cosmic Gate transcended the theater with an amazing trance set. Kristina Sky hosted her ‘United We Groove’ party at the back of ship where Luccio, Adam Stark, Monoverse, and Factor B accompanied her. Additionally, John Fleming 00 went back to back with Paul Thomas. The Officially Addicted family took over deck 8 with Keith Christopher, Dean Mason, Scotty Boy, and Bryan Lubliner. We left a beautiful sunset behind. 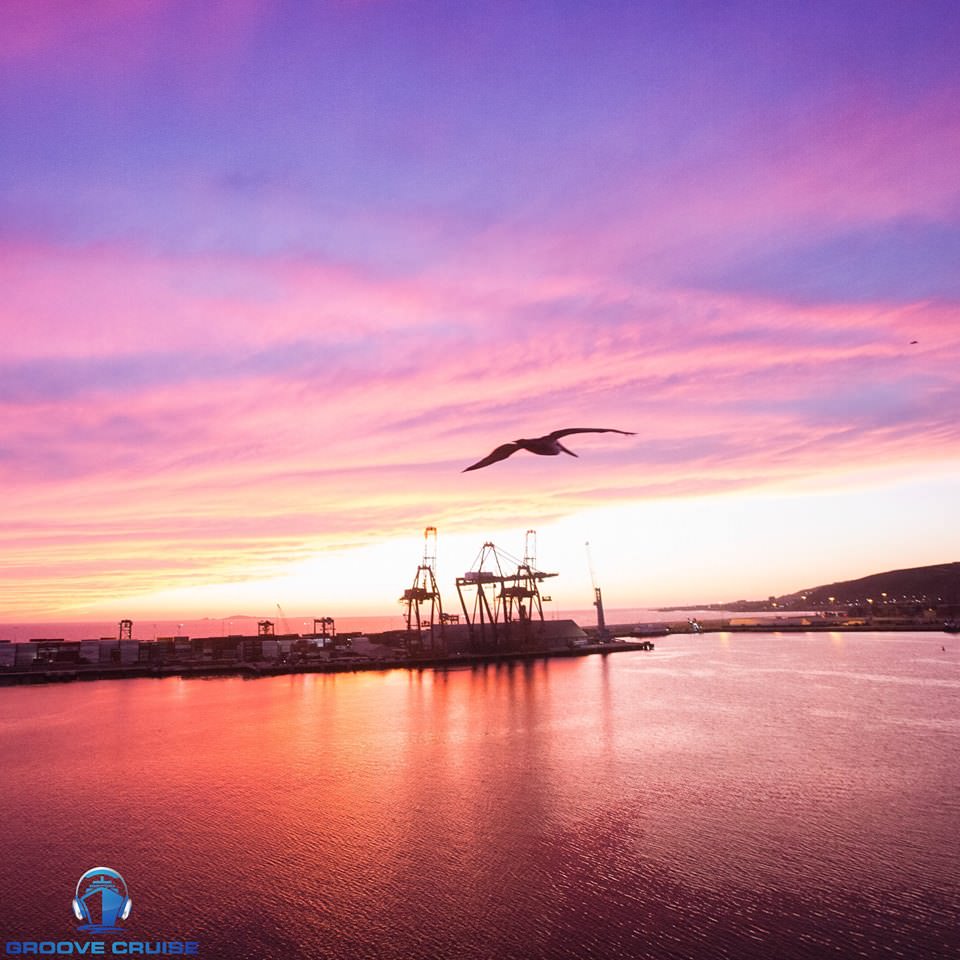 How many times can you say you saw an artist at least twice, ate food, then walked back to your room to take a nap? GC is the event to do all of that. You make meaningful friendships that last you a lifetime here. You interact with your favorite artists because they are there with you all weekend. Dressed in neon during the day and sequins at night, GCFAM kept the party going.

I watched Factor B play beer pong and enjoyed a night of trance with the United We Groove lineup plus Alex Di Stefano. The Hip-Hop party is a tradition that gives everyone a breath of fresh tunes. Tastebreakers, Adam Auburn, Damaged Goods, Scooter, and the Dancetronauts dropped it low. Rizzo Vassalo, Re’va, John Beaver, Khalon, and others played the silent disco. Presented by Random Nights, the silent disco opened each night for all night owls unable to sleep. When needing a break from all the madness, the Whet Oasis den provided a cool down in the Spinnaker lounge. Kudos to Anthony Attalla for playing a seven hour underground set to finish the day off strong.

Remember, it’s a marathon, not a sprint. GC’ers know well to take some time for themselves and watch out for each other.

As the adventure started its last day, Drums of the Sun integrated live drumming into their set by the pool. Back to school outfits filled the morning and the best of teams conquered the night. 11 artists participated in a very intense soccer tournament. The Desert Hearts crew blasted the pool with techno. The insatiable sounds of Rybo, Mikey Lion, Wyatt, and Cocodrills resonated in our ears. Meanwhile, guests attempted to beat Shiba San in his ping pong tournament. Many entered but only one could beat him! 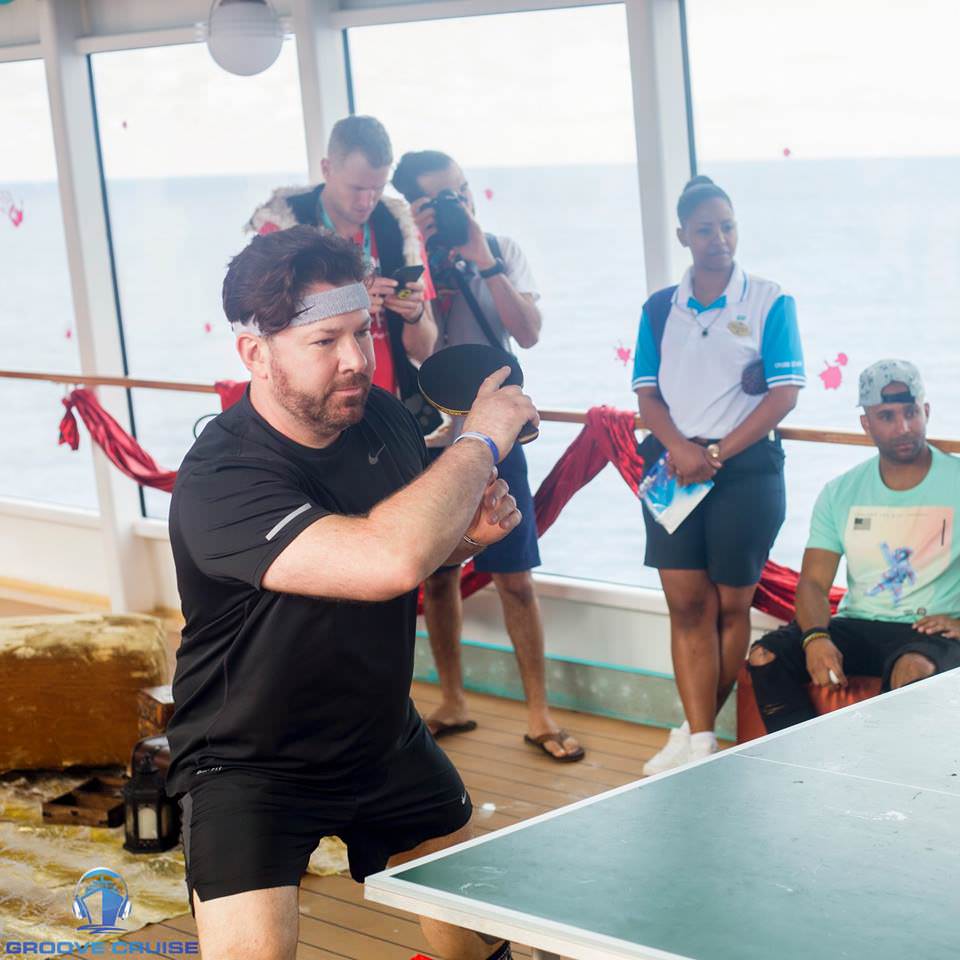 Adam Scott put on a Dash Berlin tribute set at the Great Outdoors stage. Shiba came back to the theater at night and brought the whole house down in his sequin coat. Kid Wiseman put on something new to the event: an interactive street art show. My favorite set of the night came from DSK CHK. His classic vinyl set brought back all the old dance tracks we loved and grooved to. Green Velvet closed out the night.

This is my third Groove Cruise, and it gets better each time. Music, friends, and memories always keep me coming back for more. You really do feel like family here. House/deep house, techno, and trance dominate the genres. An exciting atmosphere propels you through each day. Unlimited food, ice cream, and accessible showers make up part of your GC experience. The rest is for you to make on board. For those that know what camping at a festival is like–this is better! So much happens in such little time but it’s all worth the sweat, tears, and hangover headaches.

Only one thought floods everyone’s minds when they step off and travel back to reality. #We’reNeverGoingHome. The 15th anniversary of Groove Cruise Miami is in January and heads to the Key West and Cozumel, Mexico. Until next time Groove Cruise– GCFAM, be ready! 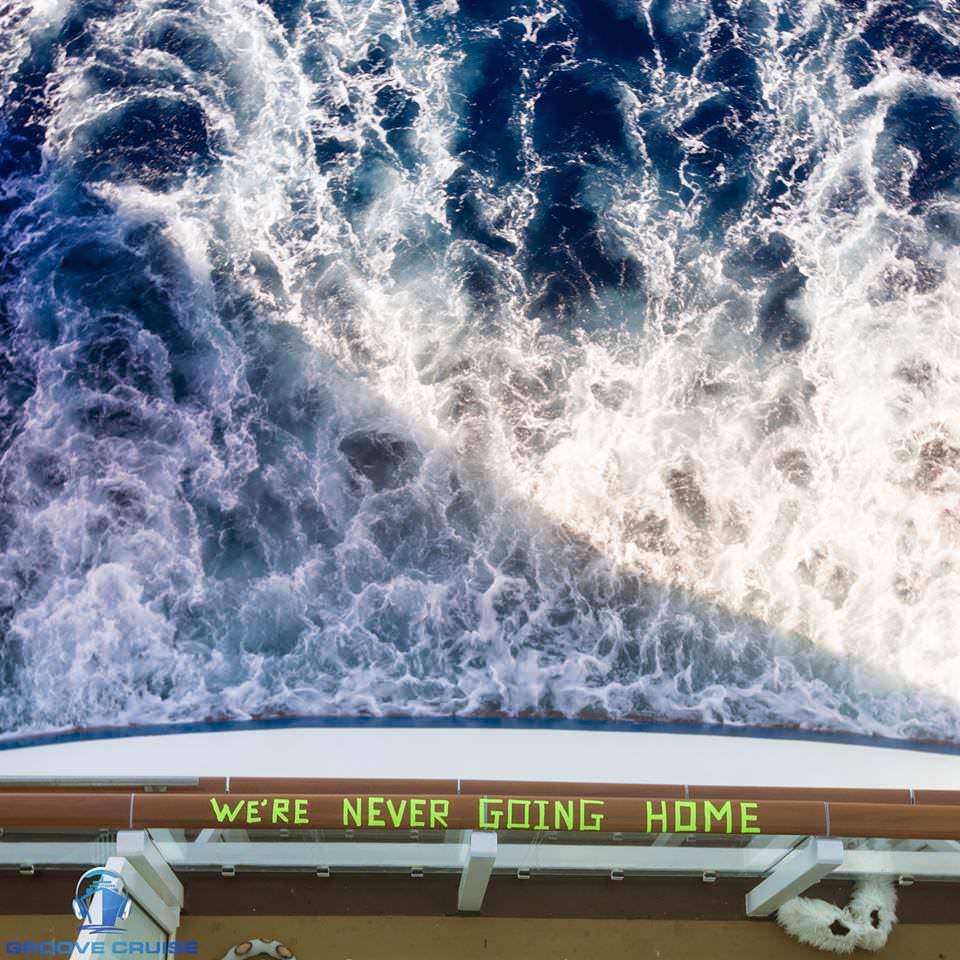