As if Paul Oakenfold hadn’t already achieved “legend” status, his performance at Stonehenge cemented it. For the select few invited to the intimate event (only 50 invited guests), it was a once-in-a-lifetime experience. Situated in Wilshire, England, Stonehenge has never had any artists permitted to perform there. Many artists have tried, but only Oakenfold succeeded.

As an added bonus, UK-born and British tech-house icon Carl Cox joined Oakenfold at the performance. As both a spectator and co-performer, Cox lent his hand with some vibey tunes as the sun set behind the stonework. Carl was thrilled to make the invitee list, and had this to share on social media:

It was a privilege to witness @pauloakenfold making history as the first DJ ever to play at Stonehenge! and a pleasure to play B2B at such an incredible location! Thanks to English Heritage and Alon from Universe for making this happen.

Guests were not just listening to house music, but a specifically designed set including U2, Lana Del Rey, and the Weeknd. To minimize vibrations and disruption to the stonework, all guests wore headphones “silent disco”-style. When asked why there was such variety to the music, Oakenfold had this to say:

“It’s more than a DJ playing electronic music. I wanted to curate an iconic moment — because of the venue and because it’s never been done.”

All proceeds went to benefit the English Heritage charity organization. Checkout some aerial and musical highlights from the epic set below on YouTube.

Think you would have wanted to be there? 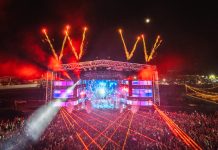 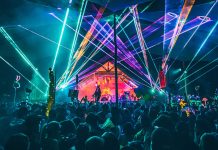