ASOT 900 Mega-Event Returning to the Jaarbeurs

Welp…the cat is out of the bag! Branded the “largest trance event in the world”, A State of Trance 900 has been announced. ASOT 900 will take place on Saturday, February 23, 2019 at the Jaarbeurs in Utrecht. The single-day festival houses around 30,000 attendees, and is hosted by the incomparable Armin van Buuren.

Each year, the production value and overall festival aesthetic gets bigger and better. Trance mainstays and up-and-comers grace the multi-stage convention center from 8pm – 6am.

Last year, five stages were featured. They were Mainstage, Who’s Afraid of 138?, Psy, Progressive, and Road to 1000. Massive acts such as Gareth Emery, NWYR, Allen Watts, Neelix, and many others were featured on last year’s lineup.

You can register for ‘early bird’ tickets to ASOT 900 here. As a palette cleanser, checkout Armin’s Mainstage set from ASOT 850 below. Be sure to keep an eye out for any lineup announcements on social media!

Who do you want to see perform this year? 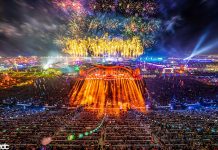