This past weekend, I had the pleasure of attending the newly renovated HARD Summer 2018 at the Fontana Speedway. From previous years, it definitely got a layout upgrade with stages on astroturf to beat the heat. A “Shady Lane” with misters was added to cool you off while walking from one end of the track to the other. People flocked to the VIP Pool, well those that could anyway. It seemed well worth it for the temperatures over the weekend. 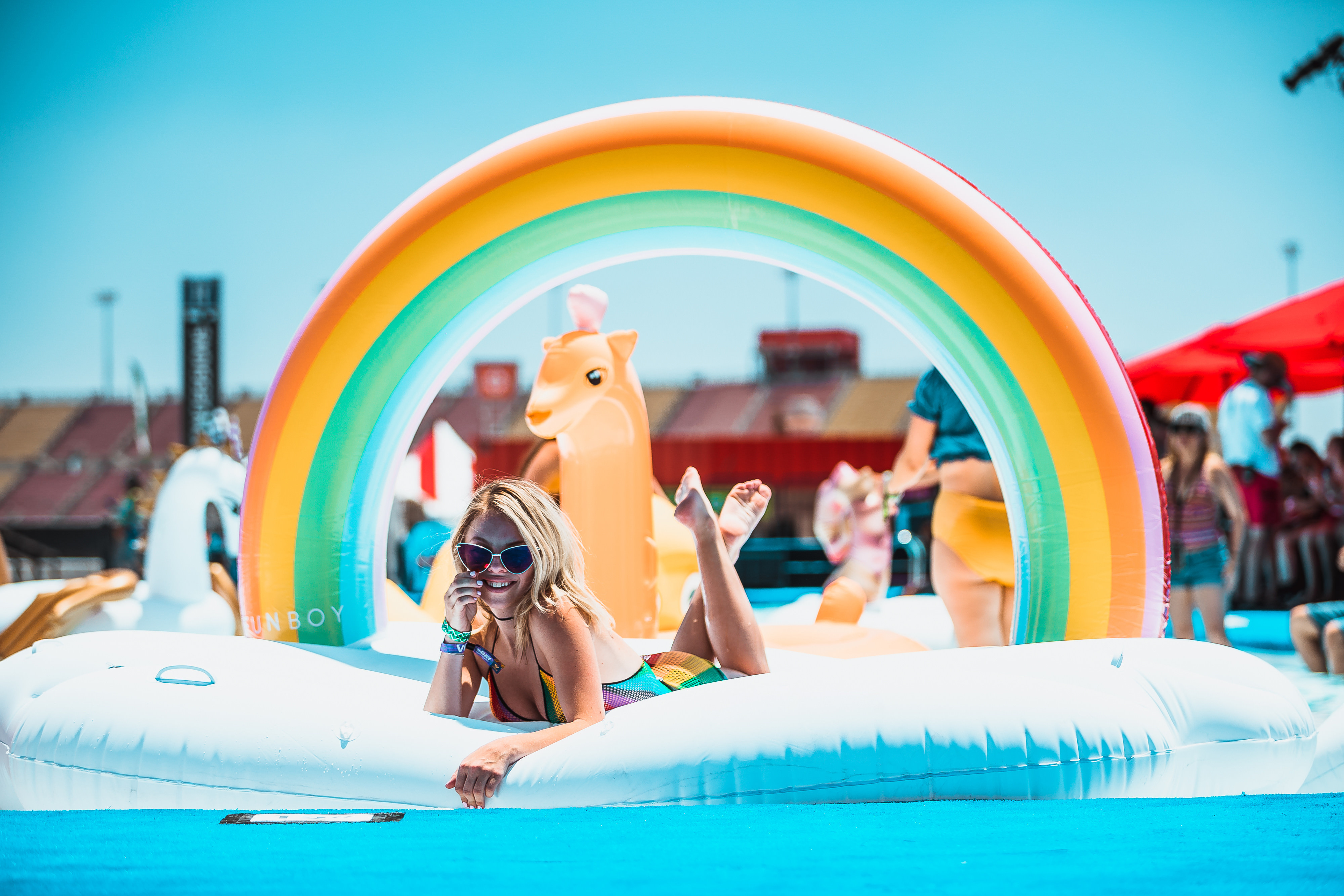 Closer stages made for easier travel time between the stacked lineup, which was a great perk. Unfortunately, the dust couldn’t be controlled and getting out after the event was a nightmare, but it wouldn’t be a festival without a few hiccups. Needless to say, I still saw a bunch of talent I had never seen before.

I started off exploring the lay of the land and stage designs. Newest DIRTYBIRD member OMNOM played the Pink Tent and I had to check out his bouncy bass and synth lines. Loud Luxury at the HARDER stage put on a deep house set that drew many people walking in. Kittens had her sound cut out from an overheated laptop, but she saved the day by engaging with the fans over the mic. Her sound guy literally iced her laptop too. Party Favor at the HARD stage had his trap acolytes there; I had to see what he brought to the Mad Decent label.

Jaden Smith, a surprise artist to me, walked back and forth on the HARDER stage as he rapped some of his tunes. He brought a new vibe to an electronic dance festival, as we’d envisioned spending most of our time headbanging and shuffling to basslines. Smith actually gave everyone some time to breathe and relax between sets.

My love for the Dirtybird label did not go unnoticed this weekend as I headed to Fisher back at the Pink Tent to jam out to ‘Losing It’. After a little while, it was Slushii time. He drove the crowd crazy. From harder, faster beats with rapid transitions to a variety of different genres and even some dubstep, he brought the energy to the mid-day for sure.

British artist Troyboi surprised me with his melodic trap/hip-hop set with little bits of dubstep mixed in. His crowd breathed in his extraordinarily unique, versatile, and highly musical tracks that fuse various textures from multiple genres. Flosstradamus came with the highest energy of all.

I finally was able to find the Green Tent this year, too – when I last attended three years ago, the racetrack hid it and I never made it – so this year, I was able to catch Ekali and Borgore b2b Getter there. Melodic trap and house music from Ekali flowed into a crazy solid back-to-back dubstep session with no boundaries. Yellow Mustard, the pairing of Yellow Claw and DJ Mustard ended the night with lasers in your face.

Back for round 2, I opened with Sage Armstrong at the Pink Tent. What can I say? House music is home.

Then I made it to Petit Biscuit at the HARD stage. He played mellow hits mixed with a tiny bit of dubstep to waken the spirits of attendees from yesterday. ‘Iceland’ and ‘Sunset Lover’ melted my heart and made seeing him all worth it. K?d gave us some more trap and dubstep. Ghastly went hard and the crowd went nuts for him.

San Holo delivered an outstanding set, letting his melodies have a voice while playing guitar! This is something new he is bringing to the table – live music to make a drop and buildup. He ended with ‘Light’ and everyone went ballistic.

Hippie Sabotage performed their infamous indie/hip-hop electronic beats at the Purple Tent. Diplo b2b Dillon Francis had the main stage crowd jumping for joy, giving them throwback tracks as well as their signature, catchy favorites. The Corona Electric Beach stage was brought over from EDC and hosted Snails – this set went super hard, which became the pre-party for Kill the Snails.

I had to split the night into thirds since three major artists closed out the event. First, I started with Travis Scott. This rapper drew in quite a huge crowd. His guys on stage floated up and down in cubes while he performed.

Virtual Self, wow. Porter Robinson’s newest alias gave a freaking trip. From lasers to understanding life in its virtual form, everyone felt the feels, shock, and awe with this one.

Kill the Snails – a joining of Kill the Noise and Snails – brought out Sullivan King, a metal guitarist that ripped during the Kill the Noise remix of ‘Like a Bitch’. The crowd went wild.

Summer is coming to a close soon, but that won’t stop the electronic dance community from making more shows for people to attend. August is a hot month, but HARD Events put on a good show. In light of recent news around the festival, you can bet that HARD will still keep bringing future tastes and evolving new music. Until next time!