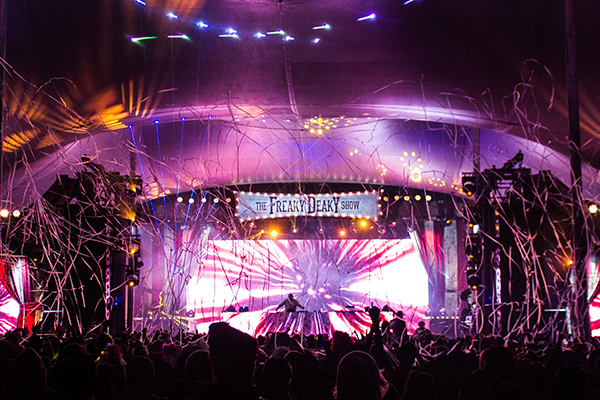 Halloween just got a whole lot more wicked this year. Disco Donnie Presents and React Presents have partnered up for Freaky Deaky Texas this October 27 and 28. Two of the most notable promoters in electronic dance music are giving you two days of spooky fun at Sam Houston Race Park in Houston, TX. Headliners include four of the biggest names in electronic music: DJ Snake, Excision, Kaskade, and a Porter Robinson (DJ set).

This ghoulish event is the newest edition of the Freaky Deaky Series. Held in multiple US cities nationally, these events demonstrate the partnership between DDP and React, both LiveStyle event brands. In the coming weeks, phase 2 of their lineup will be announced. Let’s hype up attention for this Houston Halloween ritual. Dozens more of national and internationally renowned artists and DJs shall perform.

A wide variety of talent has passed through this festival from hip-hop to house and even trance. Legends Armin Van Buuren, Bassnectar, Tiesto, and Disclosure have made an appearance in previous years. This year, Houston will feel each end of the music spectrum from the bass of Excision to the progressive song stylings of Kaskade.

“We’ve produced Something Wicked for six years and felt was time to bring Houston an all new experience,” Donnie comments. This will be a new festival brand with new partners. Plenty of new surprises across three stages await the Texan metropolis.

Founded in 2008, React Presents curates top-tier live music events and has grown over the past decade into one of the largest concert promoters in the Midwest. Disco Donnie Presents (DDP) is an award-winning leader in EDM event production founded in 1994 by James “Disco” Donnie Estopinal. Together, these promoters work to unite fans through music discovery, live experiences, and digital connectivity. Their vast amount of festivals produced each year make this Houston one another notch under their belt.

Early bird tickets go on sale today and can be purchased here. Check out their flyer below.