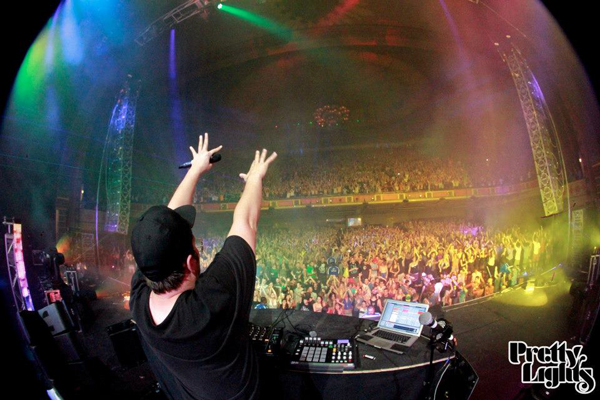 Earlier this summer, Pretty Lights sent out USB drives to simultaneously announce season one of his Episodic Festival which kicks off in August. The USB drives consisted of information that revealed his performances on August 11th and 12th at Red Rock and August 18th and 19th in Chicago. Now that the dates are coming closer, Pretty Lights pulled a similar stunt last week at 400 Festival at the Indianapolis Motor Speedway.

After his set at 400 Fest, Pretty Lights handed out a few USB sticks to a couple of very lucky fans. This time the USB stick contained 16 tracks from Pretty Lights’ personal archive. However, the tracks embedded in these USB sticks were not ordinary Pretty Lights tracks. The USB stick contained some of his most iconic tracks that were played in his performances throughout the years at the legendary Red Rocks Amphitheater as well as a few unreleased tracks. The first two tracks on the USB stick were ‘The Seed 2.0‘ and ‘Don’t Ask‘, which were both played during the DJ’s performance at Red Rocks in 2014. The stick debuts the full version of ‘Make It To The Top‘, nine unheard-of tracks and even a quick-minute mix of ‘No Rain‘ by Blind Melon. You can check out all 16 tracks below.