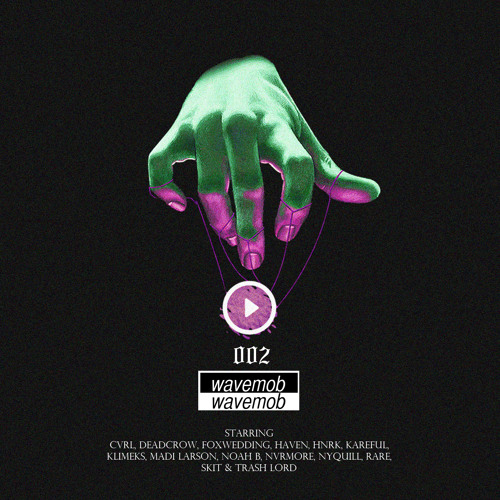 A little over a week ago, wavemob deployed 002 and it’s been on repeat for me ever since. I don’t usually gush about compilations because I never feel as strongly about them as single tracks, but this is a rare treasure. The quality never drops, with tune after tune encapsulating the non-EDM sound I described in my editorial about Chill DJs & Rest Areas. This compilation is perfect for the deep evening or sunrise, and has afterparty written all over it. While every tune on the album is great, here are my favorites.

“Castle” bursts out of the gate swinging, wasting no time putting the quintessential wavemob vibe into your universe. Trash Lord weaves a dank, future garage x trap anthem that I really hope ends up in a movie in the next year. Madi Larson‘s additions are exquisite, helping to set the meditative and murky tone for the rest of the compilation.

“Almost Home” by nvrmore is one of those tracks to save for a rainy day. The melancholic, nostalgic vocals glide above rounded, velvety bass, orchestrated expertly. It smells strongly of “Burial”, which is about as high of a compliment that I can pay to music.

“Lotus” by Skit & Kareful push into that broken beat/glitch hop territory that The Glitch Mob can occupy so well. But while their style lends to raging, this will have you nodding and getting down in your own universe. There’s a very quiet fire here, especially 2 minutes in when the drop really kicks in.

I love haven like a fat kid loves cake. The serene bass, echoing vibes and effusively potent production is second to none, and “Everlasting” is no exception. This is my absolute favorite on the album, though it probably would be no matter what other tracks were on 002. He’s the best, so show him some love. Put this on when you want to be understood, before you are ready to feel better.

Kareful does ominous, vintage hip hop influenced work. It almost feels like a Mega Man level that’s been sipping on Lean for a couple of hours. The chopped up beats move along with the ghostly chords, smoothing along for your enjoyment.

Don’t let me stop you here, dig into the album and find your favorite. Great work all over from the wavemob crew and I can’t wait for 003.