Home Music Calvin Harris – This Is What You Came For ft. Rihanna

Calvin Harris – This Is What You Came For ft. Rihanna

Way back in 2011, Rihanna and Calvin Harris teamed up for “We Found Love”. The song ended up topping the charts in over 20 counties around the world and selling roughly 14.5 million copies. By the end of it, “We Found Love” was not only Rihanna and Harris’ most successful single, but also one of the most successful songs of all time. Seriously. Only 23 other songs have sold more copies in the United States. That’s pretty crazy.

Flash forward to 2016 and the duo is joining forces again for “This Is What You Came For”. This time, it’s ‘Calvin Harris featuring Rihanna’, which means the Scottish artist has a little more freedom to show off his production chops. The end result is pretty impressive and there is no denying that this tune will dominate radio airwaves over the course of the summer. Will it perform better than “We Found Love”? Probably not, but that doesn’t millions of Calvin Harris and Rihanna fans won’t go crazy over this tune.

Calvin Harris – This Is What You Came For ft. Rihanna | iTunes 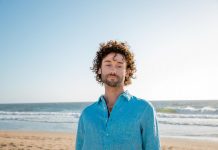