Home Music News Feed Me Takes a Bite Out of NYC to Kick Off Teeth... 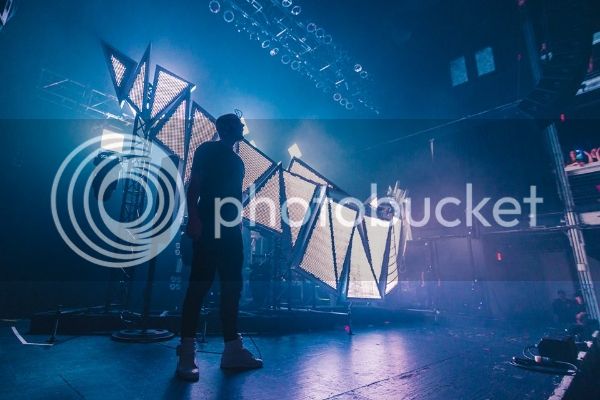 Feed Me touched down in NYC’s Terminal 5 to kick off his 2014 Teeth tour and the set was nothing short of spectacular. For two hours, Feed Me unleashed beautiful bass music, intricately weaving massive drops along a resounding electric bass line. While he combed through almost his entire discography, it seemed as if he was playing one song the entire night and slightly altering it as it seemed fit. Fans were taken on a bass journey through the inner workings of Feed Me’s mind, experiencing the growth and evolution of the London DJ. Before we were swallowed whole by the Teeth, we were able to sit with the enigmatic DJ and head of the Sotto Voce music label to find out the future of Feed Me.

You caused a bit of a “controversy” last year when you announced that you weren’t going to be touring anymore, now you’re back with the Teeth, what’s in store for us tonight?

We spent a good part of this year having it totally rebuilt…well I guess there’s two aspects to it really, there’s the boring, total logistics aspect. We used to bend stages, some of the boxes almost killed people, it was a bit over weight, and cumbersome, it was a miracle it lasted as long as it did. So we budgeted and had it rebuilt with lightweight, futuristic materials and we improved the aesthetics. It’s much closer to my kind of vision, into a more well-crafted  sculpture. The other side of it is developing the idea into what you can see, from the crowd perspective. We have more screens, more kinetic light, more LED coverage. I didn’t just want to have a big fucking screen behind me, I wanted it to be different from every show out there, and I wanted to develop more so as to create an environment. There’s also a few new bits of music actually.

Yeah well I enjoy watching deadlines sail past me (laughs.) I actually just finished a track with Kill the Noise that is in the show tonight. We’re doing a different style of release, a lot of media attention. We’re doing a cartoon which basically features a whole school of children. We went to the school and recorded children singing the lyrics and then we got them to draw the music video and we have professionals reanimating it for the music video. We’re trying to have it be a collaborative story because the track itself is a story and the more we talked about it the more we developed the idea and just took it as far as we could.

We also have a lot of cool remixes coming out for it in the works. I have more tracks in the works actually, I’m thinking of doing another EP. That was the original idea but it does take a bit. I’m also working on a second album so some of the stuff is reserved for that, and then there are some other dance stuff, your club/Beatport type of stuff. So those would be the EP while the album I would want to be more of a story like (Calamari Tuesday), more song based.

You mentioned Beatport, a few months ago you had your criticisms and now you’re producing a track for it, is it going to fit that mold?

They asked me for my top favorites and I tried to go through the top 100 and really it was awful…but not to be too cycnical I have found some cool stuff on it recently that I’ve been playing in my DJ sets. But I did it for fun, I’m actually surprised they published it I figured I pissed some people off.

All press is good press, right?

So you mentioned the collaboration with Kill The Noise and there’s also the collabs with Noisia and Skrillex, are they going to be on the EP?

Well I’m not sure what’s happening with the Noisia one, they’re arguing about the track but that happens all the time. The Skrillex one is slow, that’s going to take more time I think. I’m not going to release that track unless it’s incredible, it has to supersede what either of us normally does, so if it doesn’t do that in every way then I don’t think it’s worth doing, I don’t want to do something half assed. I’m in no rush really.

Alright, well to backtrack a bit when we were talking earlier about the Teeth tour and how you made it more lightweight, did you talk to Joel (Deadmau5) about his new tour and perhaps get ideas from him?

No words, I haven’t heard from him in a long time. I’ve seen him pop up on Youtube and Twitter now and again buying people coffee…but I heard some of his new album and I liked some of it but I’m not working with Mau5trap anymore and just been focusing on my new label (Sottoe Voce) so I don’t know anything about his new show.

Well the reason I asked is, as a fan, it seems like you both are similar; you both took a hiatus from touring and playing major festivals, you’ve both released a lot of new music, both have interactive stages, it’s as if your career arcs are very similar.

I wonder if that sort of dynamic is due to the fact that we are slightly away from the scene. Sometimes I really enjoy being at festivals being surrounded by other DJs and listening to other sets, and other times I feel like it’s healthy to bury my head in the sand and focus on what I’m doing, be totally devoid of influence. I think a good medium is healthy. I do love touring though, I’m very excited for this one.

Do you think you’d do a festival again?

Well along the lines of EDC, Ultra, Tomorrowland.

Well Ultra doesn’t appeal to me that much, at least the Miami one. I went to the Croatia one to watch and went along with some friends, Kill The Noise, I enjoyed the style of it but I feel like the Miami one is just…crowded, it’s stressful.

Well on the topic of touring, would you ever tour as Spor again?

Well alright then. With the psychedelic EP, it’s a stylistic change from Calamari Tuesday, what was the inspiration behind the EP?

I suppose it was written around the time I took off, it’s 4 stages about rediscovering why I enjoy doing this so much, so with each track I took my time, they’re longer, I didn’t try to fit them into any typical structure except for one, so that they were a more refined presentation. I just tried to do each one as a small little story, it represents an arc coming into a more refined presentation. I’ve been playing more house, tech-house and more electro so I wanted stuff that rolled out more and was more driving and evolving, where in contrast Calamari Tuesday is more compact, quick succession of quite sporadic thoughts.

To go back to the KTN bit, in a Twitter Q&A you mentioned that you were making a short movie, is that still a project that’s being pursued or…?

Well I’ve been “planning” on producing a short film, bit different. Yeah I still want to, just a question of time and getting a director and stuff, just a bit more than I can do on my own. We actually planned to do some test footage before the tour but it fell through, we didn’t have time for it.

Do you think that you would get involved with the graphic design for it?

Well we have a full scale animatronic puppet of Feed Me, about 3 feet tall, so. That’s actually him in the chair on the album cover sitting with me. Everyone thinks it’s digitally rendered which is annoying because it’s real. His hands work, his eyes his face, he exists. So it’s a question of storyboarding something up and I think it could go over really well, I love video work and I feel like music takes on a whole new life if you put it into that fashion if you spend the time turning it into an actual arc and making people believe in it. And the whole project has always been audio visuals.

So when you’re alone in the studio do you turn to him and try to get his opinion on a song?

Unfortunately no he’s not sitting in there with me, he’s at a box in the airport, probably struggling for air.

Recently artists have become more vocal about the monotony of sound in EDM, big-room, dutch house, what’s your stance on the issue?

Well I suppose…well I stood there for an hour watching someone play it and I found it quite boring. I’m quite often surprised at the seemingly un-eroding reaction it invokes from an audience, after a couple tracks of it I enjoyed it but I was ready for something else. I don’t find myself inclined to get mental about it, it’s not going to affect what I’m doing. Live and let live.

So how did you come up with the persona of Feed Me?

I did it as I created the music. I don’t remember thinking about it too much I just had the track on the screen and I had a piece of paper and just drawing little things here and there.  I did want it to be a character in its own world;  that was specifically why I started it because my previous project (Spor) wasn’t that, it wasn’t planned, it didn’t have a theme or purpose. I wanted this to be something conceived a full sphere, not just I’ve got these songs and someone says “Do you have a logo mate” and you stand there “Oh no, I don’t” I just felt it was contrite.

2014 has been really popular with debut albums, from Town Called Paradise to While (1<2) to Worlds, are there any albums that came out this year that you’ve been listening to nonstop, maybe that made your jaw drop?

Well more than anything this year I’ve been listening to the S.O.H.M album, that’s my favorite. I listened to Deadmau5’ a couple times, I actually just bought a Gregorian choir album it’s actually quite amazing. I don’t typically go for an album, I just look for tracks to play at clubs.

Alright we’ll end it with this, obviously every track has a special place in your heart but what’s the one that is really special to you?

I’d have to say Lonely Mountain, it took a long time and when I finished it, it was like I had overcome a major problem.